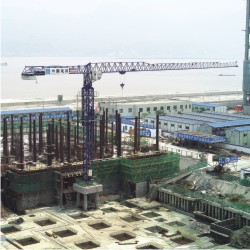 Despite its almost 8 million inhabitants, the metropolitan area of Wenzhou (east of China) doesn’t appear on the top-20 list of most populated Chinese cities. Nevertheless, the city is living a huge process of urban development, based on the landmark project “Lucheng Plaza,” where two Comansa Jie Flat Top tower cranes are doing a great job.

The project is led by “Greentown,” one of China’s most important property developers, and is the beginning of a great plan to modernize and improve the image of the city, as well as increase its commercial influence. This big complex, built in a site area of over 130.000 m2, will combine residential areas with offices, shopping and leisure center and a Gran Hyatt Hotel. Also, “Lucheng Plaza” will hold a 350-meter-high and 75-storey tower, which will be opened in 2012 as the highest building of the Zhejiang province. 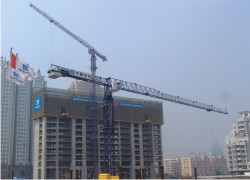 The two 10CJ140 cranes are already at the jobsite, working in the construction of other two towers of the complex, with heights of 120 and 180 meters respectively, that will hold Class-A offices. This model of Flat-Top tower crane, with a maximum load of 8 tonnes, has a 60 meter jib length and can load up to 2.000 kilos at the jib end.

“Lucheng Plaza” will have more than 450.000 m2 of built space, and has been designed by north American firm SOM (Skidmore, Owings and Merrill), one of the world’s largest and most prestigious Architecture and Engineering studios. Some of the planet’s landmark buildings have been designed by SOM, like the world’s tallest skyscraper, the Burj Dubai.