Comansa CM enters the Philippines with the best “mate”

Tower crane manufacturer Comansa CM is becoming a major player in the Philippine crane market thanks to its association with construction equipment supplier Boommate Incorporated. What had a difficult market been for Comansa CM until not long ago, now is becoming a destination for many cranes from the China based manufacturer.

"Comansa CM targeted the Philippine market in 2011, but we were not successful", says Mr. Robin Hu, Export Manager at Comansa CM. "The market had been dominated by a long-time leader until many cheap manufacturers from China gradually took control. The competition was very tough". 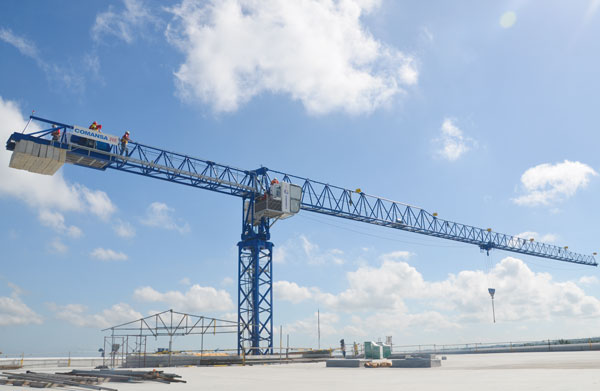 According to Mr. Wilbert Inchoco, Vice President at Boommate Inc., "Philippines is a very price-sensitive market. Teaching the industry about the advantages of investing in high-quality products like Comansa CM cranes was one of our main goals and I believe we are succeeding. Actually, we have already organized in Manila a couple of Product + Technical training workshops in cooperation with Comansa CM which had more than 60 attendees from 20 construction companies each. The market is now learning about the advantages of the flat-top design in comparison to the old fashioned pendant jibs, or the crane's modular system, which gives flexibility in application for all kind of projects and is a great solution for narrow jobsites".

The first Comansa CM tower crane sold by Boommate Inc. is working on the construction of the "University Tower P. Noval", a 47 storey residential building in Manila. The 21CJ290 crane, with maximum load capacity of 18 tons, was the best solution for the jobsite's narrow space. Also, the crane uses Comansa CM's internal climbing system, which is tied to the structure of the building and allows the 21CJ290 crane to gain in height along with the tower.

"Comansa CM's 10CJ140 8t tower crane and our latest model, the 11CJ132 6t, are being both very successful too, as they are suitable for the Philippine market", says Robin Hu. "The economy is growing and the Government is investing in infrastructure and housing developments. We expect the demand to last at least until 2022, so we are very satisfied to partner with a high quality manufacturer like Comansa CM", says Inchoco.

Fully owned by the Magdangal family, Boommate Inc. started in 2012, but its management team has been in the construction machinery business for more than 20 years.

Comansa CM is sister company of tower crane manufacturer Linden Comansa, from Spain. Based in Hangzhou, Comansa CM offers a wide range of flat-top tower cranes with maximum loads from 8 to 24 tons., which make them suitable for all types of construction projects: housing, high-rise, industrial, mining, infrastructures, etc.