The new CML165 12t luffing-jib crane will be available from September for the Asian, Middle East and South American markets 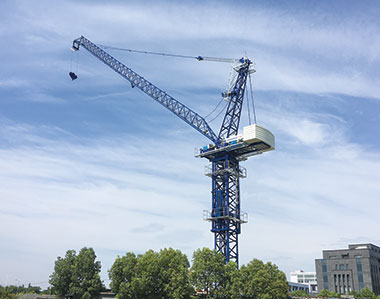 Linden Comansa’s sister brand, Comansa CM, launches the new luffing-jib crane CML165, with maximum load capacity of 12 tonnes and 50-metre reach. This new model is Comansa CM’s first addition to the CML Series, the factory’s luffing-jib family, which was created in late 2016 with the launch of the CML190 crane.

The CML165 features a 45 kW standard hoist mechanism that achieves maximum speed of upto 94 metres per minute and a drum with capacity for 545 metres of rope, allowing the crane to work in projects of upto 270 metres in height. With the optional 65 kW winch that features a larger wire rope drum, this new model can build towers of almost 400 metres in height, working with hoist speeds of upto 131 metres per minute.

The new crane also features one of the shortest counterjibs in the market, only 6.5 metres long, and an out of service radius of 19 to 22 metres (depends on the jib length). These two characteristics make the CML165 a perfect solution in narrow sites or projects with space restrictions due to buildings and other cranes or due to regulations (e.g. where overflying train tracks or roads is forbidden).

"We expect this new crane to be very successful in Asia and the Middle East due to the increasing construction demand in large cities", says Andy Huang, Sales Manager at Comansa CM. "Luffing-jib cranes are the best solution in congested sites and the CML165 is a great option for all type of edifications including high-rise buildings, which are becoming more and more popular in the region. We have already informed some of our customers about this new model and the news is receiving a warm welcome from countries such as Thailand, Malaysia, Philippines, Vietnam, India, etc.", adds Huang.

The CML165 will not be Comansa CM’s only addition to the CML Series in the near future, as another luffing-jib tower crane is expected to be launched before the end of the year. As for Linden Comansa, the parent company of Comansa CM offers a wide range of luffing-jib cranes to its customers worldwide including 14 models with maximum load capacity from 8 to 64 tonnes.