After delivering its latest consignment of crushing plant to Yograj Infrastructure Limited (YIL) in Haryana, Sandvik, the global giant manufacturing jaw crushers, has crowned its client with a coveted tag as the largest privately owned crushing plants' customer of Sandvik in India. With the recent addition, the total strength of the Sandvik crushing plants with YIL a Delhi based company with widespread crushing business network in Madhya Pradesh and Haryana, has gone up from four to five crushing plants.

Elaborating on its business profile the Chairman and Managing Director, Yogendera Singh revealed that his company is currently one of the biggest infrastructure contractors in Central and Northern India with a specialization in highways and bridge building segment and is actively involved in the massive infrastructure projects currently underway in these regions and credit for the spectacular success goes to the Sandvik, he claimed. 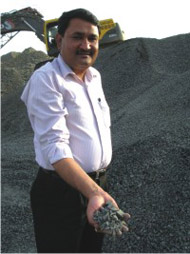 Though the company is based in Delhi but it has an extensive network and job profile in Madhya Pradesh and is currently operating 16 quarries in the two states where it is not just supplying its own projects with aggregates but also sells aggregates in the open market. Madhya Pradesh has extensive mineral deposits, including quartz aranite, granite and sandstone and moreover after the re-demarcation of the state's boundaries a few years ago the government has been systematically following a planned development of its mineral resources.

The YIL operates or owns extensive quarrying rights across the state and currently has two Sandvik crushers installed at a distant of 50 km from each other and servicing various quarries at varied and multiple locations. The new installation of the crushing plant follows the exact and accurate specifications of its sister plant as three other plants installed at Bakhrija in Haryana on the outskirts of Delhi are of similar sizes and specifications.

One of the first of its kind crushing plants in India carrying Sandvik's latest corporate features including a jaw crusher, a cone crusher and VSI crusher. The CJ411 jaw crusher is a single-toggle type with a feed opening of 1045x840 mm and a capacity of 340-445 metric tons per hour. The CH440 cone crusher takes rock of 38-215 mm in size and has a capacity of 90-413 metric tons per hour, depending on the application. The VSI crusher is a CV128 with a standard capacity range of 251-444 metric tons per hour. The grizzly feeder is a SW1252H unit. The plant uses two CS144 screens one with two decks and the other with three and these are able to deliver the heavy, medium and fine grades of aggregates as per the requirement.

Not just this, the Sandvik, which is a global industrial group with hi-tech and advanced products, is currently a world leader in areas like tools for metal cutting, equipment and tools for the mining and construction industries, stainless materials, special alloys, metallic and ceramic resistance materials as well as process systems. In addition to this, the Sandvik Group is a leading global supplier of equipment, cemented-carbide tools, service and technical solutions for the excavation and sizing of rock and minerals in the mining and construction industries.

Praising the company for its unmatched products and superb after sales services the YIL Chairman and Managing Director, Mr. Yogendra Singh, claimed that he prefers to stay with the one brand of crusher because of ease in replacements, spares and service and also because of the strong working relationship that it develops with the manufacturer. The Sandvik has helped him a lot to grow right from the time he began developing the aggregates.

He, however, pointed out that the cost of aggregates can be very expensive in areas like Delhi where the demand is high and the transportation costs is even higher. But he realized that if he had to succeed in roads and highways building segment he had to control his own aggregates supplies and therefore moved into quarrying and aggregates production in Madhya Pradesh and Haryana. 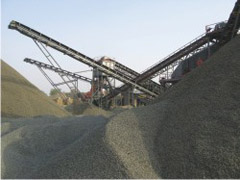 The YIL purchased its first Sandvik crusher in 2005 from the manufacturer with a promise that if he succeeded a second Sandvik plant would be added and the promise was fulfilled the very next year. Currently, the unit owns five crushing plants and there is a possibility of adding another in the immediate future. Awarding full marks to Sandvik as a reliable business partner, he said that demand for aggregates is so high that the company is selling whatever it produces. In the current scenario, the tight project schedules and contracts of delivery time one cannot allow unexpected downtime and needs total reliability.

The Sandvik has its presence at the YIL offices in Delhi, Haryana and Madhya Pradesh where spares are supplied directly from the Sandvik India headquarters in Pune. Over a period of time, the YIL has developed strong working cooperation with the Sandvik and the bond and relationship between the two is getting stronger, day in and day out.

Similarly, outside Delhi and in Central India, there are other programmes apart from roads and highways like linking the towns and villages thereby changing the provincial and rural landscapes completely. Apart from this, all the segments including Railways, airports, hospitals, dams, IT projects, schools and pipelines laying projects will require aggregates of massive quantity. Currently, funding is also easily available from diverse sources including state owned and national financing institutions besides, overseas agencies are also extending funds on easy terms and conditions ensuring bright future for companies like Sandvik.

These are tough and challenging times for the Construction Industry as there is a general nervousness around resumption of businesses, safety of its people and machines, the availability of service support, and the

CDE Asia, a leader in inventing wet processing equipment, has launched its new multiple-product manufactured sand plant, christened as Combo Multi. The demand for sand and aggregate is growing exponentially with rapid urbanisation