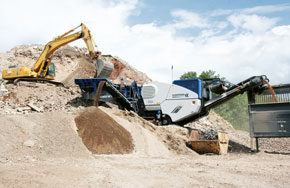 The demand of new crushers and screens is being driven by upcoming road infrastructure projects in India. The Indian government has started awarding fresh road contracts along with kick start of stalled projects, following tardy release of contracts few years back. The upcoming business opportunities will bring new owners of crushers, taking up contract crushing in major way for the main contractors. Jalgaon, Maharashtra-based, Sairaj Developers, is amongst one of the new owners to enter into the business of contract crushing, with new crusher for supplying aggregates, needed for road projects.

Formed just two years ago, the company has acquired one brand new, Kleemann Mobicat, MC 110 Z EVO Series, track mounted jaw crusher a month back. The crusher is the second unit sold by Wirtgen India to the equipment owner. The first one was brought by Dilip Buildcon, one of India's biggest contractors.

The new jaw crusher will be used by Sairaj Developers to produce Granular Sub Base material (GSB) for four laning National Highway-9 between Solapur and Hyderabad covering western Indian state of Maharashtra and Andhra Pradesh in South India. The entire length of the project is 280 kms. The total requirements are of 35,00,000 tons of GSB material for the entire stretch. Sairaj has been awarded contract crushing for supplying 5,00,000-8,00,000 tons by L&T, the main Indian contractor for the project.

The jaw crusher will take feed material of 0-550 mm, sourced from the project site itself out of excavation. During its operation at the site for one and half year, it will deliver 150 tons of 0-65-75mm, crushed aggregates per hour, in accordance with the requirement of the contractor. Mr. Sagar Deshmukh, CEO, Sairaj Developers says, "Presently we are using the jaw crusher for 300-400 hours a month, meeting the requirement of L&T. As the project picks up, we will scale up production."

He says, "As a precondition to buy the unit, we asked Wirtgen India to prove the crusher's performance by running it for 350 hours. During the course of its running, the crusher was able to deliver exact required volumes of crushed aggregates, as per technical specifications, given by Kleemann, 145-190 tph, convincing us to buy it. The other deciding factor behind going for the crusher was its lesser initial cost. Further, assurance of complete product support, including imported Scania power pack by Wirtgen during 2000 hours of the warranty period of the crusher, backed by its full fledged set up in India, convinced us to buy the equipment."

However, the other major reason behind Sairaj's decision to buy Mobicat, MC 110 Z EVO, jaw crusher is its lesser operation and maintenance costs. Mr. Deshmukh, explains, "The jaw crusher is able to deliver the similar output of a cone crusher. As a result, with a single stage unit, we will be able to minimize our labour costs. Further, by cutting down second stage, we will be able to reduce our fuel and maintenance costs as well."

Based on the performance of the jaw crusher, Sairaj Developers will buy one additional unit of 350 tph, Kleemann Horizontal Shaft Impactor. It has bagged another recent order from Indian road contractor, IRB for four laning National Highway -211 between Sholapur and Aurangabad in Western India. The equipment will be used to supply 6,00,000 tons of GSB for 25 kilometers for the project. The entire stretch of the project will be of 398 kms.

These are tough and challenging times for the Construction Industry as there is a general nervousness around resumption of businesses, safety of its people and machines, the availability of service support, and the

CDE Asia, a leader in inventing wet processing equipment, has launched its new multiple-product manufactured sand plant, christened as Combo Multi. The demand for sand and aggregate is growing exponentially with rapid urbanisation