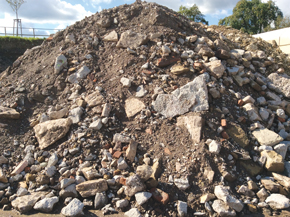 The complexity of modern day concrete constructions coupled with the shortage of river sand due to various legislations against their rampant extraction has led to serious search for alternative sources of sand for quite sometimes. Construction industry has all along depended on river sand, pebbles, and gravel sourced from riverbeds as source of coarse & fine aggregates. These were cheap and easily available even though these were never of consistent quality causing problems for major constructions such as dams etc.

The problem has been sorted out to a great extent by the use of manufactured sand (also known as Msand) the efficacy of which was established through a lot of research by reputed institutes. Production of these requires rocks to be suitably processed through crushing and washing to meet the industry standards. It has been established that the advantages of particle shape, proper gradation, negligible silt content, and absence of deleterious ingredients are some of the major factors for acceptance of this sand for the construction industry of today.

Thus the industry has been able to circumvent a crisis situation by use of legally mined sand from rivers as also using Manufactured sand to meet its requirements. The requirement of sand, however, is massive; a very conservative estimate based on cement consumption works out to 360Mt per annum by the end of 12th five-year plan i.e. by the end of 2018. Thus the problem of bulk availability remains particularly for cities & towns, which are not near to any river or rock source. The problems are compounded by high transportation costs from long distances. This will obviously raise construction costs.

One of the established ways in which the problem could be mitigated to some extent is the use of recycled sand & aggregates obtained by recycling of Construction & Demolition Waste (C&DW). This is a relatively new concept in India though much in use in Europe. Normally the raw material is a part of the Municipal Solid Waste (MSW) of any city. It is a component of what is called the 'inert' that cannot be destroyed by the normal process of disposing/utilising of municipal wastes such as burning or composting. So, these are dumped as landfills at various places, which not only lock up the location for any use but are also an environmental hazard. Additionally, huge costs are incurred in their segregation, storage, and transportation. While the inert form almost 50% of total MSW of any city, the C&D component of the inert part is almost 20%.

A conservative estimate shows that sand & gravel is 10-12% of the total MSW of a city. For a major metropolis, the quantity works out to 1500-2000 tons per day on an average. Analysis of the material indicates that it contains about 70% aggregates & 30% sand that is mixed with clay & slimes. By washing of the material to remove silt & clay about 80% yield can be achieved. Within the washing process, aggregates undergo heavy scrubbing and lightweight particles like plastics are removed from the system. Smaller aggregates are sometimes crushed again to produce additional sand and thus overall about 25% of the material is converted to sands and the rest as aggregate. This in effect means that 1000-1200 tons of sand and aggregates can be generated from the city waste and reused. The economics of this is obvious when measured against the cost of disposing off to different land filling sites and procuring equal amount of sand from other sources outside the city. There is possibility of utilizing the rejected slimes for brick making. 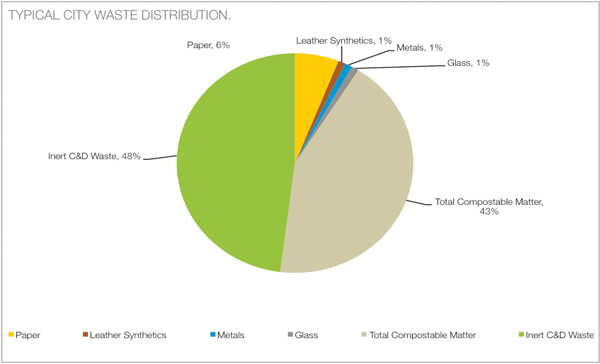 Tests have shown that the recycled material can be readily used for roads (bituminous/hydraulically bound etc.), earthworks (embankments/cuttings), concrete sub structures, ground improvements etc. The use of recycled sand and aggregates could thus reduce the requirement of fresh sand in major constructions and thereby optimize the use of high cost of material in a project. Additionally, reuse leads to conservation of our natural resources and is environment- friendly when seen against the current practice of landfilling or dumping in the periphery of fast growing cities.

CDE is a leading player in the world that has developed urban friendly technology for washing of C&D wastes for generation of quality sand. This technology has the capability of accepting different types of feed, as C&DW material varies widely from city to city particularly in silt content. The plants which are compact with low footprint, are operated through a PLC controlled system and have zero discharge of effluents to the atmosphere. 90% of the water used in the process is also recycled and reused. There are a number of such C&DW recycling plants installed by CDE across the world with two of them being in Delhi, India.