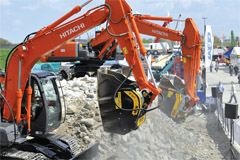 For the Vicenza-based company MB S.P.A, strong success began three years before in 2007 when the event provided an important chance to people to become acquainted with and appreciate the high quality of its products, as well as the solid foundation that the company managed to lay down so quickly allowed the company to become number one in its field. BAUMA 2010 also provided the opportunity to strengthen the already known presence of the company’s German branch and of the entire MB Deutschland team.

Thousands of visitors and customers stopped over the three exhibition areas set up by the company, world leader in the production and sale of crusher buckets: an indoor area the historical BF 90.3 model was on display with its new restyling; a promotional point with all crusher bucket models on display and a team available to customers and visitors in order to illustrate the technical features its revolutionary equipment; and also where visitors were able to witness the excellent versatility of MB’s crusher buckets as they crushed all types of material, ensuring efficiency, productivity, cost savings, profits and environmental protection to those companies that employ them. Two crusher buckets were put to work, the smallest one of the range – BF 60.1 – and the largest one – BF 120.4 together with the iron separator – working simultaneously at a relentless pace. 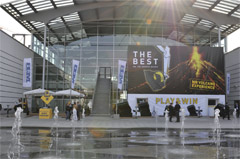 On top of its historical crusher buckets, bauma 2010 also provided to MB S.p.A. the opportunity to introduce its latest product, the new universal quick coupling, a winning tool that makes construction site jobs as easy as possible.

The level of visitors was good in terms of quality and quantity despite the fact that many foreign companies were forced to miss out on the event due to closing of the air space. Hence bauma 2010, a reference point for construction equipment manufacturers, represented an additional chance for MB to confirm itself world leader, always at the forefront in the demolition and recycling sector, through constant research conducted by a qualified work team that continues to innovate essential work equipment for the construction site.

But MB’s commitment does not end with the closing of bauma 2010: in fact, strong of the results obtained and the thousands of contacts received, the MB team now will be involved directly on field in order to bring home additional orders at world level.

The constant commitment aimed at customer satisfaction, the continuous improvement of results and a company policy orientated towards total quality are values that MB S.p.A. has pursued since its founding. MB’s product innovation, also recognised by many international awards won at different tradeshows, has become the company’s strong point.