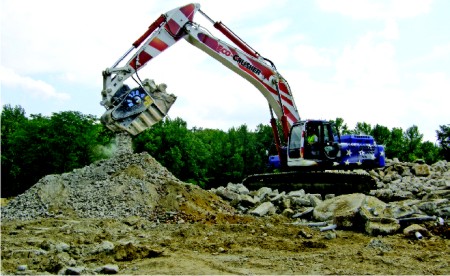 Usefulness of MB crushers was proved when US construction market inducted it for use based on potential and versatility of the MB crusher bucket in various types of work site jobs.

Nobody would have thought that a product which is so technologically advanced but which was born just a few short years would have been enlisted and moved beyond world barriers to arrive at the doors of the American army.

The Project: Construction of 1635 houses and renovation of over 443 for military families. An extraordinary ambition for America and a dream for every company trying to win over the project. After years of fierce competition between sector companies in the area, the project was awarded to "Giberson Enterprise" in New Jersey. Giberson Enterprise, are MB (Meccanica Breganzese) importers to the United States of America and therefore were able to provide an ample fleet of machines. 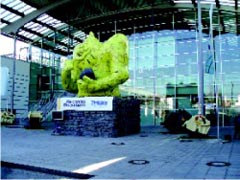 The machine's compactness, capability, compatibility and productivity have often been discussed, and this time the importance of these traits was demonstrated in this very significant acknowledgment, which has got not only the United States of America and the US media talking, but the whole world! The project will be completed in 2011, reaching a total of 2084 houses. (below, an image of works which have begun)...

Official importer Giberson confirms that this project has given everyone a sense of immense pride, yet has also been quite difficult due to the many rigid laws and verification measures in place. It is almost being on cloud nine with this development.

Year after year, MB has continued to receive more and more awards, its ambitions growing over time, as seen in the statement made by Guido Azzolin: "Today our product is even more spread out over the world and is becoming part of the standard equipment used by construction companies. Foreseeing demolition and recycling market dynamic needs is a way of giving body to our desire to grow and offer ideas to help make our clients' jobs simpler, faster and more productive, in full respect of the environment."