Italy based firm MB s.p.a. specialised in the production of bucket crushers, cutting-edge machines designed to meet customers' needs in terms of operational quality and effectiveness. The company has received a prestigious order to supply its bucket crusher to build the new Johannesburg stadium in South Africa where the 2010 Football World Cup final will take place. Currently, MB machines are successfully working on the construction site of the Soccer City Stadium. 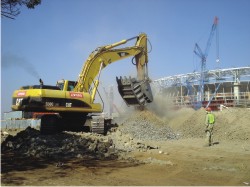 "We were very excited when, together with our South African in distributor High Power Equipment Africa, we won the order to supply the bucket crushers for construction of the stadium where the opening and closure ceremonies for the 2010 World Cup will be held," commented managing director of MB s.p.a. Guido Azzolin. "It was a real surprise and made us proud of our products and proud to be able to bring a piece of Italy to this mega world event."

MB s.p.a. came in contact with the South African dealers several years ago when the company decided to venture beyond national boundaries and launched into an even bigger adventure to conquer the overseas markets and to bring their bucket crusher to the attention of all possible buyers. The special qualities and added value of the bucket crusher when demonstrated to the South African dealers, it easily won their heart and resulted into a strong collaboration between them which is still rock solid and flourishing. Now, MB is exporting large number of machines to South Africa.

The presence of the bucket in South Africa made it possible for the company to come into contact with customers from other African countries who immediately recognized the enormous advantages of using MB product as well as its numerous applications; obviously, anyone owning one of its buckets becomes highly competitive on the market! 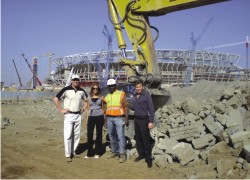 The world-leading Italian company is now capable enough to manufacture technologically advanced bucket crushers with unmatched performance as a result of major investments in research. This is why MB products were chosen by Liviero Civils for the construction of the largest stadium in South Africa with a capacity to hold almost 100,000 people. The project demonstrates the outstanding operational flexibility of MB bucket crushers, which have rapidly established a strong position in this market. It also highlights the process of internationalisation carried through by the company, which for many years has been the unchallenged leader in the production of bucket crushers at an international level.

It all began when, after numerous visits to construction sites in Johannesburg, the company discovered that work on the large construction complex for the World Cup was generating considerable quantities of inert material. This led to the idea of proposing the bucket crusher, an idea that was liked by the works management with a degree of interest that went well beyond the company's expectations.

"We are proud to demonstrate that Italy has much to offer the world, particularly for these large-scale events," adds Azzolin.

Mr. Azzolin concludes, "In a period of global economic crisis like the present, our machines in Johannesburg demonstrate that companies that invest in research and technology and propose cutting-edge products will always be successful and can establish a strong presence even in such elite segments as that of large-scale construction."

MB has developed a competitive and economically advantageous solution, the benefits of which are demonstrated by its use in the Soccer City Stadium in Johannesburg.