South Godstone-based Downwell Demolition has maintained its long connection with Sandvik mobile plant division through the purchase of a new C-10+ track-mounted mobile crusher. Purchased for its manoeuvrability and ability to work on inner city sites where space is restricted, the new unit joins an existing Extec C-12 in the Downwell fleet, the Extec C-12 itself being a replacement for an earlier model.

Founded by career demolition man and long-time Extec devotee Matt Phillips, Downwell Demolition has been in existence since 2003. Phillips says that his company's big break came with the demolition of Itchen Hill Hospital in Folkestone, Kent on a fixed rate contract. "The profit from that job enabled us to purchase our first machine and that, in turn, enabled us to buy a second just 12 months later," he explains. "We now operate a fleet of 27 machines and six on-highway trucks and have 50 employees on the books."

Key among these machines is an Extec C-12 purchased in 2007 and which is now employed on the demolition of an old Sainsbury's store in High Wycombe to make way for the impressive and long-awaited New Eden project. 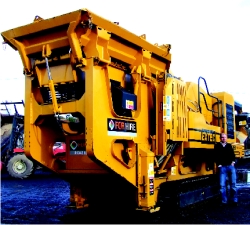 "The Extec C-12 has performed without a problem. We obviously process the rebar with shears prior to crushing to avoid belt damage, but the Extec machine has crushed everything else on site. And it has had to do some serious work," Sandford continues. "The real beauty of the Extec C-12 was being able to move it quickly around the site rather than take the waste to the crusher. It's saved an enormous amount of time and truck movements as it is manoeuvrable."

Having enjoyed such exceptional performance from its latest Extec C-12 machine, Downwell Demolition has also chosen to update its C-10 machine to a C-10+ specification. Matt Phillips says that the C-10+ (and the previous C-10) was purchased to allow the company to work efficiently on inner city sites, particularly in and around London.

The new C-10+ was commissioned on site at the Quantum House redevelopment in Croydon, a four-month contract to demolish and recycle a 7-storey office block that was the former home of EMAP magazines including, ironically, Local Authority Waste & Environment, a magazine specialising in the waste and recycling field. The C-10+ was then sent to Kingsnorth Power Station in Kent where it processed a mixture on concrete and slag on a 7 week contract. And it will shortly be sent to DEFRA in Guildford where the Downwell team are currently engaged in a soft strip of the building in preparation for new affordable housing project by Linden Homes.

"Almost without exception, demolition waste is now processed on site and left for future development," Matt Phillips concludes. "The two Extec machines enable us to process all C&D waste into Type 1 or 6F2 very efficiently, which makes them not only environmentally friendly but also extremely cost-effective".