Layher - Perfecting the Art of Scaffolding

Layher's present product characteristics and services help customers achieve long-term success and increase the profitability of their companies. The Layher Allround Scaffolding has been established as a synonym for modular scaffolds in the market. The Allround Scaffolding offers unsurpassed versatility to be used in construction sites, chemical industry, power plants, aircraft, shipyards, event sector, theatres, and arenas.

Allround scaffolding uses a simple, unique and bolt-free connection technology. Sliding the wedge head over the rosette and inserting the wedge into the opening immediately secures the component. There is still sufficient play to secure the other end of the ledger. A hammer blow to the wedge transforms the loose connection into a superbly strong structurally rigid one. The face of the wedge head is now precisely positioned against the standard. Connections in quick to assemble and spanner less scaffolding systems make a unique combination: providing structural strength immediately on assembly and subsequent ultimate force transmission while offering a choice of automatically right–angled or splayed connections with universal safety right from the start.

To transfer pulling force, every frame is secured by locking pins or bolts to each other. In this way, the tower can be assembled on the ground and placed by crane.

The Allround bridging system is the ideal complement to Layher Allround equipment. With just a few additional components, the load-bearing capacity of the proven Allround system can be increased enough to create, for example, wide-span footbridges or support structures for heavy loads.

Simple bolt connections enable the components of the bridging system to be connected up, resulting in quick and easy assembly. When used as a support beam for a scaffolding structure, podium or roof structure, the Allround bridging system is connected to the structure above it by using Allround standards integrated into the top. Using the wedge-heads welded onto the sides, even suspended scaffolding structures can be connected, or several bridging units can be connected next to one-another for a further increase in the load bearing capacity. When a footbridge is built, the Allround bridging system is connected to Allround standards using the wedge heads provided on the sides of the posts. These support elements permit pre-assembly on the ground and subsequent insertion by crane, which is a major advantage when spanning bridges across roads. 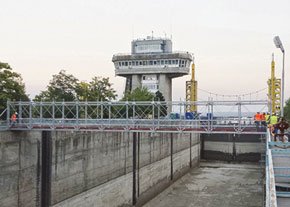 Layher Allround Bridging Structure
Regardless of whether it's used for new construction or repair – on the sites, Layher Allround Scaffolding is an "all-rounder" in operation. Unlike project-related and one-off structures using timber or steel, the modular-designed system ensures efficient assembly and safe use thanks to its short assembly and dismantling times and its flexible adaptation. These were persuasive advantages for the modernization of the locks on the Danube-Black Sea Canal too. This work required for each lock two stairway towers for fast and safe access to the lock chambers and one temporary bridge for fast crossing of the lock.

To keep to the tight schedule and to comply with the high safety requirements during modernization of this artificial waterway, which shortens the course of the Danube to the Black Sea by up to 450 kilometres, depending on the branch, Allround Scaffolding from Layher was the best choice for the this work. With just a few basic components and well-designed additional parts, a construction kit for almost every conceivable application is available. That also goes for stairway towers with variable storey and exit heights and for differing widths and load capacities: as an aluminium-light platform stairway tower – even with an ample access width of 0.94 metres for heavily frequented stairways or for easier carrying of work materials – up to stairway towers of individual stringers and steel decks for public use.

This project used the platform stairway, a one-piece and quick-to-fit stairway with entry and exit landing. The necessary bridges with spans of around 15 and 26 metres were also just as quick to construct.

The right solution in terms of span and assembly speed was the Allround Bridging System. This supplementary component is a modular lattice beam using which wide-span bridges using bolt-free pin and wedge-head connections can be built just as quickly as support beams for heavy loads. The temporary bridges, in this project, were set down on the walls of the lock chambers. Layher steel decks with their perforated surface profile ensured not only high stability in bad weather conditions, but also a non-slip surface.

The managers, in-charge, were delighted by Layher's service and by the temporary Allround solutions which – after rapid assembly – made a major contribution towards rapid construction progress while offering the skilled workers above all sure-footed access to and across the locks of the Danube-Black Sea Canal, which came into service in 1984. And they were also impressed by the flexible uses possible with the Allround system, which unlike one-off structures, can be used again and again for new jobs: as work scaffolding, concreting scaffolding or for example as shoring. An efficient solution.