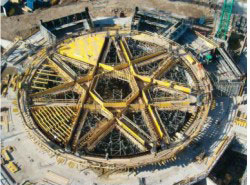 A rare example of contemporary ecclesiastical art is the Swiss architect Mario Botta’s “Chiesa del Santo Volto.” The structure shell of this modern church has recently been completed on the grounds of the former FIAT steelworks. Seven 35 m towers rise from a star-shaped ground plan that is meant to be reminiscent of a gearwheel. The complex shape and precisely stipulated construction schedule called for a formwork concept that was planned right down to the last detail – and just such a concept was duly supplied by Doka Italia.

The cogwheel-shaped ground plan of this new Turin landmark is a deliberate visual reminder of the site’s industrial past. As is the 55 m tall industrial chimney, which is being converted into a belfry enclosed in a metal spiral that is illuminated at night. Mario Botta came up with a bold, futuristic concept for this church: Seven towers, with glass roofs at a height of 35 m, are grouped around a central tambour. Light will fall on each of the towers in different ways at different times of day, marking the passage of time in the liturgy. Completely new approaches are taken here not only with regard to the architecture but also to the use of space: The church basement houses an auditorium with an 800- seat congress centre and the entrance and reception zones. The actual “centrepiece” of the church, the altar, is at ground floor level.

Contractors Grassetto Lavori S.p.A.started work on the demolition of the FIAT steelworks in May 2004, so as to be able to finish the new church in good time for the Winter Olympics in February 2006. Achieving this goalcalls not only for a well-organised site, but also, and above all, for a sophisticated formwork concept.Since October 2004, many different Doka formwork systems have been in action on the site. One of the main tasks at the beginning of this formwork assignment was the slab for the basement level. This has a diameter of 50 m and has to sustain the load from the 7 towers and the central tambour. It was constructed by forming 14 downstand beams in the shape of a 7-pointed star, casting them in one single pour and then pre-stressing them. To form these 1.1 m high downstand beams, Frameco framed formwork was set up on d2 load-bearing towers. Consisting of lightweight components, Frameco can be erected without any special tools, which saves a great deal of time. The site crew cast the slab itself using the highly adaptable Dokaflex 1-2-4 floor-slab formwork. Following early striking, the Grassetto Lavori crew shored the entire slab zone with the Heavy-duty supporting system SL-1. This system can sustain 420 kN per prop. Being a rentable, modular system, it is the ideal solution for this particular task.

The next stage of the assignment was to form the central tambour, an 8 m high cylindrical shaft “hovering” 16 m above the ground. To this end, 150