More Possibilities - Layher Products and Services
Layher's present product characteris- tics and services help customers achieve long-term success and increase the profitability of their companies. The Allround Scaffolding has been established as a synonym for modular scaffolds on the market. The Allround Scaffolding offers unsurpassed versatility to be used in construction sites, chemical industry, power plants, aircraft, shipyards, event sector, theatres and arenas.

Allround scaffolding uses a simple, unique and bolt free connection technology. Sliding the wedge head over the rosette and inserting the wedge into the opening immediately secures the component. There is still sufficient play to secure the other end of the ledger. A hammer blow to the wedge transforms the loose connection into a superbly strong structurally rigid one. The face of the wedge head is now precisely positioned against the standard. Connections in quick to assemble and spanner less scaffolding systems make a unique combination: providing structural strength immediately on assembly and subsequent ultimate force transmission while offering a choice of automatically right – angled or splayed connections with universal safety right from the start.

To transfer pulling force, every frame is secured by locking pins or bolts to each other. In this way the tower can be assembled on the ground and placed by crane.

Application
Lots of ledges and crevices in the rock, ruined walls and mounds of earth – erecting the scaffolding around Castle was a challenging job for the scaffolding company. The Allround System from Layher with its comprehensive range of parts allowed the work scaffolding not only to be optimally adapted to the geometry of the ruins, but also flexibly extended. The assembly of Allround platform stairways for site access was, for example, also possible without any problems.

Perched on a mountaintop, it rises majestically over Modenbach valley: Castle. Although visitors to the castle, a popular destination for excursions, enjoy panoramic views over the expanses of the Palatinate Forest, the largest contiguous forested area in Germany, a look at the former castle itself is rather depressing. Its heyday is long past, and this historic gem is now in a sorry state. This is now set to change: following the purchase of the ruin by the State of Rhineland-Palatinate, an extensive restoration job over several years has been decided upon to preserve this cultural monument. This is to be made possible by work scaffolding that always optimally hugs the building contours and includes platform stairways for site access. The many ledges and crevices in the rock, as well as the ruined walls and mounds of earth, make this a challenging job for the scaffolding company.

That made precise and detailed planning all the more important, as the company owner René Schwarz reports: of the engineering and logistic aspects and with regard to the vital topic of working safety. “Besides the demanding requirements of the complex building geometry, it also had to be borne in mind that the scaffolding needed to be regularly modified at each stage of the restoration work, and also that the site was only accessible by a narrow path. That affected not only the logistics, but also the risk assessment. For matching the work scaffolding precisely to the prevailing situation at all times, Allround Scaffolding from Layher was the only conceivable solution for the team. This flexible system of modular construction offers, with its comprehensive range of parts, an unmatched variety of uses, particularly for awkward geometries or very irregular architecture. Speedy assembly is also assured by the bolt-free wedge-head connection used in Allround Scaffolding. 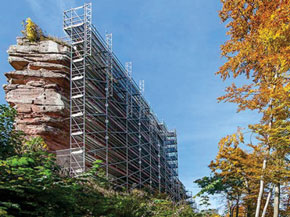 Since the lower part of the scaffolding is directly in contact with the rock face, while its upper part could only be fixed using ring ties already present, the company first made a structural analysis perfectly matched to the local situation. This also had to take into account the high wind loads resulting from the castle's exposed position on a mountaintop some 500 metres up. The material planning also made allowance for all the construction states of the scaffolding to match work progress, so simplifying the logistics. In view of the narrow path to the foot of the ruin, the material itself was transported first by wheeled loader and then by hand: 70 metres distance – and up to 35 metres in height, because no hoist could be used due to the absence of electric power at the time the scaffolding was being assembled. The preparation of foundations for every scaffolding positioning point was another important step to take account of the long service time and the soft earth surface.

Now there was no further obstacle to building the work scaffolding. What was required was a one-metre-wide structure of Load Class 5, since besides assessment of the damage it was also to be used for interim storage of stones to repair the walls. For adjustments to the contours, the scaffolding continually had to be widened inwards, partly using Allround brackets and partly by building up to six more scaffolding sections. Transmission of the increased loads was assured by horizontal braces and diagonal stiffeners, in addition to lattice beams for vertical reinforcement of the work scaffolding without placing unnecessary strain on the structure. Well-designed components from the comprehensive Allround product range also ensured a high degree of safety while working: Allround platform stairways permit faster and safer ascent inside the scaffolding, while sturdy Layher steel decks with structured surfaces allow non-slip working in any weather.

Three to five erectors were built in this way a vertical access safe in every way – at least for the first building phase, as the scaffolding will have to be modified regularly in the course of the restoration work, which will probably take until 2016. That requirement is one that can be achieved without any problems thanks to the high flexibility of Allround Scaffolding: good prospects for preservation of Castle, which probably dates back to the 11th century and is hence one of the oldest in the Palatinate region. When the castle fell into ruin is not clear. It was presumably already badly damaged in the Peasants' War of the mid-1520s, and finally destroyed during the course of the Thirty Years' War. Since the late 19th century it has been privately owned, but for many years it was left to decay, and nature took its course. The castle was once again revealed to view only after brambles and ivy had been cleared. So it was all the more surprising what, as reports show, was still there to be admired: Staufer-period masonry using rusticated ashlars, a Gothic gateway and not least a four-part pointed-arch window.

PERI ALPHADECK was launched by Cabinet Minister, Government of Haryana, Ram Bilas Sharma at bauma Conexpo India. This is the first system where the ideation, prototype, design and the planning has been done

The brand promise made by German company Layher, has held true for over 65 years as the company continues to deliver more speed, more safety, more customer proximity, and more future solutions: values which