A very special première took place in the heart of Berlin in mid April: A Wirtgen W 2200 with a 3.80 m wide FCS milling drum unit was in operation in Germany for the first time. On Berlin’s “Straße des 17. Juni” (Street of June 17), where hundreds of thousands of fans celebrated during the Football World Cup, more than a million people danced at the Love Parade, and top athletes put in top performance regularly at the famous Berlin Marathon, the most powerful cold milling machine in Wirtgen’s product portfolio put in top performance as well. 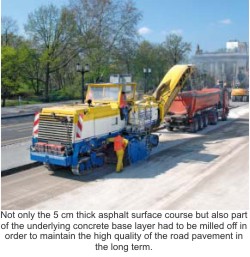 The “Straße des 17. Juni” is one of Berlin’s major traffic arteries. Average traffic is as high as 50,000 vehicles per day, so that pavement damages are inevitable. Extensive cracking and deformation, as well as countless patches on the almost 1,000 m long, 8-lane section in the borough of Charlottenburg-Wilmersdorf spoke for themselves. Not only the 5 cm thick asphalt surface course but also part of the underlying concrete base layer had to be milled off in order to maintain the high quality of the road pavement in the long term. The operation had to be carried out under tremendous pressure of time, as the entire width of this highly frequented east-west corridor was to be opened to traffic again as early as possible. The main contractor “Arge Straßenbau 17. Juni”, under the technical aegis of Trapp Infra Berlin GmbH, and their Dutch partner Freesmij therefore decided to use a large Wirtgen milling machine model W 2200 equipped with a 3.80 m wide milling drum. 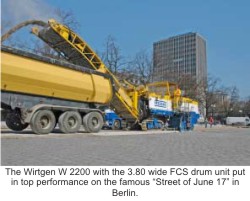 The machine used in Berlin is a standard W 2200 model equipped with FCS, which is short for Flexible Cutter System. This Wirtgen system enables the machine’s drum to be exchanged within an extremely short period of time in order to alter the milling width or the tool spacing. Many customers mainly from the United States had enquired after machines offering milling widths larger than 2.20 m. Wirtgen met this demand by offering the FCS in “XXL design” for their large milling machine model W 2200. Milling widths ranging from 2.20 m to 4.40 m can be realized using the elements of the FCS modular system. Some 50 cold milling machines of the W 2200 model with milling widths exceeding 3.80 m have been sold to North America to date. 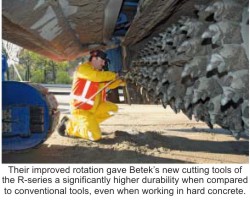 There is, however, an increasing number of construction sites in Europe today that also permit these giant machines to operate profitably. Dutch contractor Freesmij has had very positive experiences in this regard. Their four high-performance milling machines W 2200 are in operation all the time – either equipped with the 2.20 m wide standard drum or as an FCS machine with the 3.80 m wide drum unit. Managing Director Henk Vreeswijk explains the benefits, “We use the ‘XXL drum units’ in the W 2200 to complete large projects like the one here in Berlin with low labour requirements and within a very short period of time. They achieve a tremendous milling performance, especially when milling surface courses, that can’t be realized with the standard milling width of 2.20 m.” Wirtgen’s top-quality leveling systems, which have been specially adapted to these milling widths, additionally ensure that the milled surfaces are of maximum evenness.

Vreeswijk adds, “The large machine doesn’t pose any problems even for transport. Its overall width is less than 4.35 m even with the 3.80 m wide drum. That enables us to obtain the necessary transport permits for the machine without any problems.” 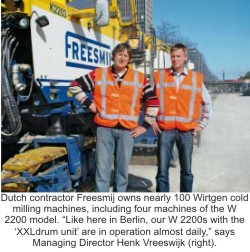 With their W 2200, the Dutch crew milled off the bituminous surface course across the full carriageway width of 14.50 m in just four adjacent machine passes. After that, the high-performance machine with its 671 kW (900 HP) engine had to pass a real acid test: The concrete base layer had to be removed at a depth of between 15 to 20 cm. The machine mastered the job with superior ease, needing three and four passes respectively with a milling depth of approx. 5 cm each. Freesmij’s crew used Betek’s new cutting tools type W 7 EH R for the first time on this project. The tools with the “R” in their name are part of the new “rotation series,” and are easily recognized by their typical Betek design with notches in the tool’s steel body and wear plate.

A larger guide cone enables the redesigned, 4 mm thick wear plate made from high-grade tempered spring steel to optimally guide the cutting tools in the holder.Mounting the tools is simplified due to a smaller inner diameter and thus more tightly pre-tensioned clamping sleeve. A larger contact surface of 45 mm diameter reduces wear and tear of the tool holder. The clamping sleeve has been optimized as well: It consists of a new material, and its wall thickness has been increased by 5% – a feature that also improves its resistance to wear and tear. The new, patented twin-stop sleeve transmits significantly higher retention forces and has been coated to facilitate mounting.

XXL Durability of Cutting Tools Impressed Even in Concrete 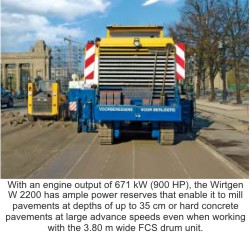 The machine’s operation in Berlin made one thing very clear: The new R-system offers improved tool rotation, reduces wear and tear and simplifies mounting of the tools, thus cutting the overall operating costs. The W 2200 milled off approx. 600 m3 of asphalt and 150 m3 of concrete with one set of cutting tools. These figures are impressive proof that the new “rotation technology” gives the cutting tools a significantly higher durability when compared to conventional cutting tools, even when working in hard concrete.

The W 2200 had yet another special feature on board: a dust extraction device. In the Netherlands, this device has been mandatory in all front-loading machines for some years, as it significantly reduces the operator’s exposure to dust. The dust is extracted from the milling chamber and is fed to the process again in the upper area of the discharge conveyor. This has a clearly visible effect, as the workplaces of both the machine operator and the ground crew are practically free from any dust. Dutch contractor Freesmij, who developed the dust extraction device in cooperation with Wirtgen, was rewarded with the “Good Practice Award 2004”, a prize conferred by the "European Agency for Safety and Health at Work."