The Future of Hot Mix Asphalt 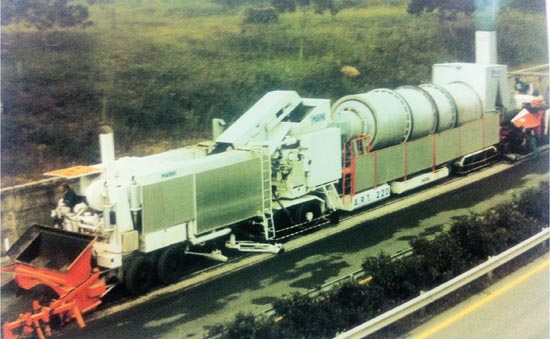 1985 - recycling train at work at Genova airport
Hot mix asphalt has been used for ages to build roads and will continue to be the most ideal solution in terms of costs, energy savings and ease for building reliable and comfortable highways. Global hot mix asphalt has seen a great change in its constitution and production and the trend continues, thanks to asphalt's inherent capacity to evolve.

Marini's' contribution to the promotion of this technology has been phenomenal, especially since the second world war. The following is a brief excerpt of the technology and trend in the asphalt mixing business.

Asphalt is closely associated with modern life, but not many are aware about its ancient roots and about it as a naturally occurring material with a rich history.

The English word "asphalt" comes from the Greek word "asphaltos," which means "secure". Though the asphalt that we use today is mostly refined, asphalt can be found in its natural state in asphalt lakes and rock asphalt.The first known use of asphalt for anything was by the ancient Sumerians around 3000 B.C. as an adhesive for inlaying precious metals, stones, etc. Ancient people used it as for art, embalming, waterproofing, caulking and mortar. 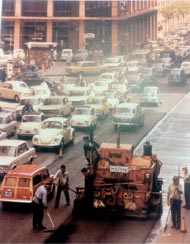 1969- Italy
Asphalt pavement is the most known use today, of course.Its first recorded use was in 625 BC in Babylon, that's a long time ago.

Christopher Columbus landed off the shores of La Trinidad in 1498 and discovered the famous Asphalt Lake. However, its use was rare for centuries, becoming a truly viable option in the late 1800s.

In the 1800's Thomas Telford built more than 900 miles of roads in Scotland, perfecting the method of building roads with broken stones. His contemporary, John Loudon McAdam, used broken stone joined to form a hard surface to build a Scottish turnpike. Later, to reduce dust and maintenance, builders used hot tar to bond the broken stones together, producing "tarmacadam" pavements.

With patents being issued in Europe and the U.S. in the late 1800s, the actual paving becoming prevalent in the early 1900s. As cars became more available, the asphalt paving industry grew exponentially.

In the 20's Marini had already started producing machineries for various road-building applications. Marini added impetus to the construction activities by designing, developing and constantly raising the industry benchmarks in terms of productivity and performance. The comprehensive product portfolio of machines for asphalt road construction already then with Marini, speaks volumes about the focus of the company.

In the 40's, during World War II, asphalt technology greatly improved, spurred by the need of military aircraft for surfaces that could stand up to heavier loads.

After the terrible destruction inflicted by the Second world war, Italy went on to rebuild itself through the development of a mighty road and motorway network, using Marini machinery and asphalt plants.

During the 50's Marini had become a leader in asphalt plants and had started exporting these machines and technologies worldwide. By 80's innovations kept pace with demand, refined asphalt had already become the most commonly used form, and asphalt recycling was developed. Marini by then had applied for patents for recycling of asphalt pavements.

By 2002, EPA announced that asphalt manufacturing facilities were no longer on its list of industries considered major sources of hazardous air pollutants.


These improvements kept coming, and various blends for durability, drainage, noise reduction, and regional concerns like heavy rainfall and ice further transformed the asphalt mixes. The ancient Babylonians would be pleasantly surprised if they could see what they started!

Now with environment change, economic turmoil's and absolute need to conserve natural resources, much impetus has been put in by asphalt producers world over to re-think asphalt. However, contrary to the expectation of shelving this highly performing product, asphalt has emerged once again as the best solution. This versatile feature of asphalt emerges thanks to its potential to evolve – states Blesson Varghese MD Marini India.

Asphalt is one of the most recyclable materials on the earth and tops the list on this front. Green mixes today have made this fantastically natural product even more energy efficient and cleaner to work with. Today, asphalt mixes have evolved to become 30% more energy saving and equally environment-friendly compared to traditional asphalt mixes produced earlier this decade. 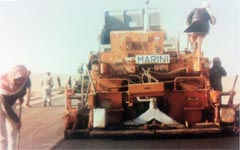 1968 Finisher at work in Saudi Arabia
The basic method to produce asphalt hot mixes hasn't changed drastically. However, the change that we see today, has been implemented thanks to the techniques which are used to produce hot mix and hot-mix mix design per se. These changes have been implemented by researchers, hot mix plant manufacturers and end users. All of this has been possible only due to the inherent nature of asphalt – evolution.

"Asphalt," no longer means the same thing in different parts of the world. It has evolved and adapted itself to meet the local challenges and needs for durability performance and environmental impact.

The evolution of the asphalt plant technology from Volumetric mixing in a continuous mixing drum to the modern asphalt batch plant, where each ingredient is processed, weighed and mixed separately along with the advancement in technologies ranging from application equipment to pavement mixes themselves has brought this technology a long way in India. Although conformance to environmental aspects still have a long way to cover, compared to advanced countries.

Constant research by Government Bodies and an open mindedness to incorporate beneficial technologies especially in the area of asphalt mixes has contributed to better skid resistance, riding quality, temperature & rainfall resistance and recycling of asphalt.

It would not be long before we begin to implement mixes which deliver better visibility through reduced road spray, road noise mitigation and longer life. In a developing country like India, with huge needs for infrastructure development, the industry eagerly & rightly awaits greater impetus on greener mixes and technologies, which deliver economical benefits, environmental friendliness and longer life.

Just as change is the only constant in today's world, Asphalt mixes and the production methods are going to change and change very rapidly. Today, it is smarter to think in terms of evolution rather than innovation. Innovation is, of course, still essential, but major innovation is very rare.

An asphalt plant is an investment that will stay for at least a decade and half. A plant installed in 2011 will operate in 2025, with what binder? or at what outlet temperature? Technical visibility is shorter, the weight of legislation and economic aspects are rapidly changing, and as a result decision makers must go for a HIGHLY ADAPTABLE solution.

Marini implemented the THINK 5E philosophy around 6 years back, which works wonders for end users. For example, while some aspects like high content recycling, Higher fraction mixes, Low energy mixes, performance additives, etc are still at a nascent stage in India, Marini users however can face the future with confidence since each standard plant is supplied with these futuristic technologies enabled.

With Simple add-ons customers can easily configure their plants to meet any of these technological demands. Even the most recent and highly complex systems like processing RAP up to 100% are available as simple add-ons, ensuring Marini clients lead all the way.

Asphalt is evolving and will continue to do so. In order not to be left behind, mix producers therefore must think about the nature of asphalt than simply at the project in hand.

The engine technology in H2 ICE vehicles is similar to diesel engines, enabling use of existing knowledge, design and production machineries, and the vehicles can deliver high power, work with impure fuel, work in dusty conditions, and refuel