"Given the focus of the current government, the road sector looks poised for a robust growth for the next three years. The optimism cuts across the equipment manufacturers as well as EPC companies in equal measure and we, at Escorts, are fully geared up to serve the market and be a part of the growth story," says Mr. Rajinder Raina, General Manager, Escorts Construction Equipment.

The first half tenure of the current Government belongs, undisputedly, to roads & bridges. Various initiatives were taken and some key policy decisions were introduced. The policy changes comprise model concession agreement (MCA) approval of the exit policy, introduction of the Hybrid Annuity Model (HAM), setting up of an agency for developing highways in the north eastern region and allocation of funds in the budget for PMGSY etc. There are 70 major projects lying pending for one reason or another; more than 80% of these have been put back on track.

It started with efforts to deal with impending concerns and facilitation of fund flows. The major initiative has been approval of a comprehensive exit policy for projects before 2009. By virtue of this, developers can divest 100% equity in their projects at the end of two years of completion of the project. This concession agreement has already been provided for the agreements signed post 2009. This has not only helped many construction companies out of 'ICU' but also encouraged them to bid for fresh packages of road work. 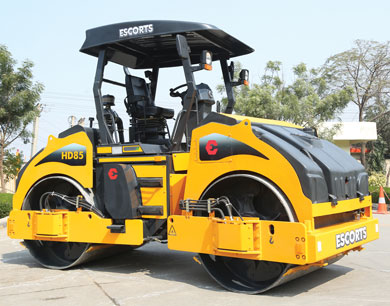 With the ministry of Road Transport & Highways (MoRTH) approving amendments to the provisions of the existing MCA, road sector is assured of long-term gains from it. These amendments for projects awarded on BoT basis will improve confidence amongst contractors and also the lenders. MoRTH has now the authority to appraise and approve projects of Rs.10 billion and above as against the earlier Rs.5 billion, will bring in the much needed speed, and save time, money and effort.

Projects like road augmentation under Bharat Mala project (5000 kms), Char DhamYatra( 1000kms), state highways & other 4 & 6 lane expansion projects will accelerate road development. All this is being done to win back the private players as government alone can't achieve the ambitious targets which is a must if we want inclusive growth.

The impact of road development work on road compaction equipment can be measured from the fact that the first six months of the calendar year 2016 posted a growth of 45% over the same period in 2015. A total of 267 Motor Graders were sold in 2013 but the market grew by 10% to 294 units in the year 2014. Come 2015 & the volumes almost doubled to 581 units. The growth story continues and I think year 2016 would see more than 700 units getting sold. Asphalt Finisher sales for the year 2015 was 675 units but for the year 2016 the volumes are expected to cross 725 units. The 9.0 metre & above category of finishers are deployed for double lane applications. During the year 2014, approximately 60 units of these machines were sold but year 2015 saw the volumes cross 100 units. There will be a growth this year as well. Road projects have helped the sales of backhoe loaders as well.

Given the focus of the current government, the road sector looks poised for a robust growth for the next three years. The optimism cuts across the equipment manufacturers as well as EPC companies in equal measure.

Escorts shares this optimism and is fully geared up to serve the market and be a part of the growth story. Besides other models, the demand for Escorts Tandem Vibratory roller HD 85 NS (New Style) has picked up much faster than we had projected. The demand for the soil compactor Escorts 2420 has gone up as well. Escorts, along with our vendor partners are geared up for the next six months which is expected to witness high market demand.