"Escorts Construction Equipment (ECE), the pioneer in introducing compaction technology in India is positive on the growing demand of compaction equipment and expects that the next few years will see this market scaling up consistently by over 10% CAGR," says General Manager-Marketing Mr. Rajinder Raina adding that Escorts is well positioned to cater to the demand coming from PMGSY, NHAI, smart cities, and other infrastructure construction projects including mines, hydel power etc., with the combination of its 10 and12.5 Ton soil compactors.

Escorts has historically been introducing contemporary technology in the Indian market place. One such paradigm shift was brought about in soil compaction in 1985, when Escorts introduced vibratory soil compactors in the market. Till such time static mechanical compactors were being used for compaction of soil and asphalt for road compaction, irrigation canals and all other good-earth compaction jobs. Over the passage of time, vibratory compactors took over completely from static rollers.

Government agencies made Vibratory Compactors mandatory for road works because of Technical reasons. The quality of compaction delivered by these compactors is over 95%, which improves the quality of the roads dramatically and makes them have better service life. The productivity of these machines is far higher & cost per unit output much lower. The reference data book for roads called 'Orange Book' lays down the various guidelines proposed by NHAI, as per which compaction by vibratory compactors of specific tonnage is a pre-requisite for all its projects. Escorts put lots of efforts to educate the customers and sold the concept to the end users for first nine years, which changed the face of soil compaction in infrastructure projects in India.

Having pioneered this concept Escorts added Tandem vibratory roller and also launched the first 12Ton plus category soil compactors in India. This found huge demand from EPC contractors who were working on NEW and GQ projects monitored by the office of the then PM, Mr. A.B.Vajpayee. 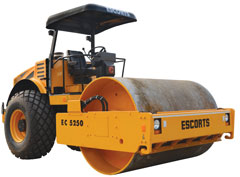 The compaction equipment of international class is available in India. However, the processes for making roads are not strictly followed by the contractors. The quality of supervision is low and the strict adherence to layer thickness, moisture content, right compaction of each level/layer and even the monitoring of right temperature of the asphalt is far below the desired level. This is a big area of concern. Strictness on adherance to compaction norms will help the compactor market grow.

Next few years will see compaction equipment market grow consistently by over 10% CAGR. All the major global players are present in the Indian market & the customer is spoilt for choice. The technology is contemporary and the looks of the equipment are up there as well. Escorts has the widest range of compactors to offer and has further invested lots of resources to give the customers value for money on owning and operating of the equipment backed by the best in class after sales service. The customers/users are in for pleasant surprises from Escorts in near future.