Higher performance, the ultimate in ergonomical design for the driver and intelligent, fully automated functions–these are the striking features of new generation cold milling machines from Wirtgen. With the manoeuvrable W 100 F, Wirtgen is placing a new emphasis in the further development of milling technology in the machine class with a standard working width of between 1 m and 1.30 m and a front loading system.

The W 100 F has been nominated for the bauma Innovation Award conferred by the German Construction Industry in the “new development machine” category. 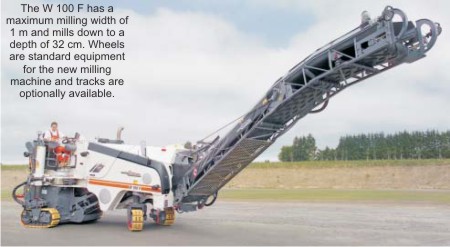 The tried and tested Wirtgen Flexible Cutter system will also be optionally available for the W 100 F. This patented system permits a swift change of milling drums so that a single machine can perform a range of different applications. Using FCS drums, customers have working widths ranging from 30 cm to 1 m at their disposal with the W 100 F. 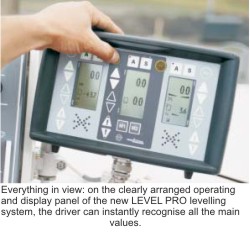 The engine of the W 100 F offers a more efficient transmission of power yet it is also more economical with fuel. The powerful engine of the new Wirtgen cold milling machine is a 6-cylinder turbo diesel engine from Cummins with a nominal output of 209 kW/285 PS. The fuel consumption in full-load operation is 58 l/hr and in 2/3 load operation, it is just 38 l/hr. When the engine speed is reduced, the quiet running drive unit is able to increase the power at 1900 rpm to 227 kW/308 PS. These special engine features result in an increased productivity and improved daily performance combined with an economical mode of operation. In milling and travel drive, the rpm is automatically controlled – an additional benefit which helps to reduce diesel consumption, and make working with the machine quicker and more relaxing.

“Less is more” was one of the objectives in this development and functions were further developed or grouped together with this in mind. On the operator interfaces, the functions have been optimized in such a way that the number of switches was reduced by some 20%. The driver has all the most important functions directly in view on the clearly arranged main operating console. From a seated position, he can safely and comfortably operate all the control elements. In addition, all central control elements, such as the operation of the side plate, are also integrated in the right-hand armrest.

The ergonomically designed operator’s platform of the cold milling machine is thus arranged across the entire width of the machine to ensure that the driver has a full view of the right-hand side of the machine from a seated position.

For an even better view, the operator can swing his seat over the side of the machine. The position and the suspension of the seat can also be adjusted according to the operator’s individual needs, as can the angle of the steering wheel.

A range of automatic functions simplify the milling machine driver’s everyday tasks. They are pre-set but can also be de-selected by the driver. Fully automated control functions have been installed for core areas, such as water management. The automatic system for the water system ensures that water is only selected when actual milling work is taking place, in other words, when taking up position and starting the milling mode. This helps reduce water consumption. The selection of the milling drum is also controlled automatically.Another example of the increased convenience and functionality of operation is the fact that the operation of the scraper and the gradation control beam has now been combined at the milling drum. Both components can either be fixed or set to a floating position at the push of a button. Additionally, the conveyor speed is also controlled automatically for the loading belts of the W 100 F: even when the engine speed is reduced, it is ensured that the speed at which the milled material is loaded is constant and high.

Precise and safe levelling systems are among the core competences of the Windhagen-based milling specialists. Wirtgen has now developed its very own, path-breaking system with software which has been specially programmed for cold milling machines. The entire system consists of sensors, a control unit and an operating panel for the driver.

The most important parameters, such as the set and actual values for the milling depth on the right and left-hand sides of the machine and the tilt are shown, legibly and in a clearly arrangement, on the graphics-supporting digital display of the LEVEL PRO operating panel. The machine operator can enter or correct the values quickly and securely with the large-surface tactile switches. Modern digital signal processing ensures the supreme precision of the milling results on site.

The LEVEL PRO operating interface is divided into a total of three areas with separate displays: as usual, the left and right-hand displays are for all functions concerning the left or right milling side respectively. There is an additional display at the centre which can be used to enter further pre-settings independently of the ongoing application, e.g., the comparison for switching between milling depth and tilt. Shift keys can then be used to seamlessly transfer these parameters to the left or righthand side of the machine.

As another new feature, two practical memory keys have also been added, which can save the milling values already applied for subsequent retrieval, as in the case of a calculator, so that these values can be reassumed by the system at the push of a button.

The new levelling system can be operated simply and intuitively. LEVEL PRO has been extensively tested by customers under tough on-the-job conditions and the response has been extremely positive. The system is installed at an easy-to-reach location on the right-hand side of the operator’s platform, next to the main operating console.

The advantages of LEVEL PRO