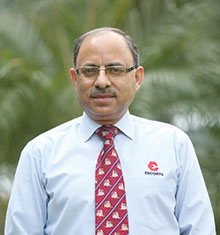 Compaction is the method of mechanically increasing the density/densifying of soil/asphalt. The equipment used in India, prior to mid 1980s was a three-drum static roller.

Escorts introduced the first Hydraulic Vibratory Compactor in the Indian market in 1985 by entering into a technical collaboration agreement with the Global Pioneer of the technology, M/S Dynapac of Sweden. The 10Ton soil compactor marked the beginning of a new era in Compaction technology and a paradigm shift thereby. More than 30 years on, this Soil Compactor Escorts EC 5250 retains a very high market acceptability.

In year 2000, Escorts tied up with M/S HAMM of Germany for purchase of technology for a range of compaction products. The first one to be launched, in the series was the Asphalt Compactor model Escorts HD 85.The technology was contemporary and the performance best in class. It was the only dual purpose compactor that could also be used for soil compaction. In 2002, Escorts EC 2420, a 12.5 Ton soil compactor was introduced. This was the time national highways, GQ and some Expressways were being constructed. Escorts EC 2420 delivered the ideal results including high productivity & low cost of operation. Being the only one in the weight category gave it the requisite edge.

As adherence to compaction norms became mandatory for the roads, the shoulder compaction work also came under the gamut of definite compaction levels. This resulted in demand for mini-compactors. So Escorts once again, led the way like a true leader and developed the first 3 ton tandem vibratory compactor in India. The model named Escorts EC 3664 was fully developed by our R&D. 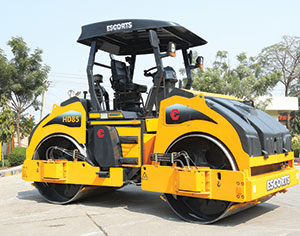 As expressways get built and the project tenure gets reduced, demand for newer models of compactor is going to come up. Though small but there would be demand for 12 ton plus capacity soil compactors. No surprise that a couple of 20 Ton compactors are doing duty on one of the road projects in India. We have seen growth in demand for Pad-foot compactors in the past 1 year as Greenfield roads get built up. Road construction processes, methods and materials will undergo changes which will result in demand for new equipment. Motor graders are in demand & Cold rolling machines are selling in good numbers.

March’17 was probably the best ever for compactor industry as a total of 513 units got sold during this month. This is a record number of compactors ever sold in a month. During the year 2016-17, more than 3600 units of vibratory compactors got sold in Indian market place. Things look promising & the current fiscal is projected to post growth over the previous year.

Today, Escorts is supplying customized compactors to DGBR for high altitude and cold climate areas and also exporting to various countries. This gives sustainability to the demand as its compactors can match any global player on technical front. The price gives the company an advantage of competing with global brands.