“Given the government’s increased focus and an ambitious road building target, the global CE players are taking keen interest in the Indian road construction industry. The IRF World Road meeting, which is taking place this year in India bears testimony to the growth of this sector in the country,” says Mr. Rajinder Raina, General Manager-Marketing, Escorts Construction Equipments (ECE).

A sustainable, appropriate technology-based micro-enterprise with the capability to maintain rural, farm to market roads and transform them into reliable, all weather roads using unskilled labor with no heavy equipment, is one of the underlying principles for focus on roads by developing nations. The next step is to lay the black/asphalt top on these roads. One of the statements of Prof. C.K.Prahlad, which aptly describes the scenario, says, “Wealth creation can only occur if these people are engaged in producing some fundamental need of society. Improving the lives of the India’s poorest people would improve the lives of people everywhere by creating new markets and economic opportunities.” 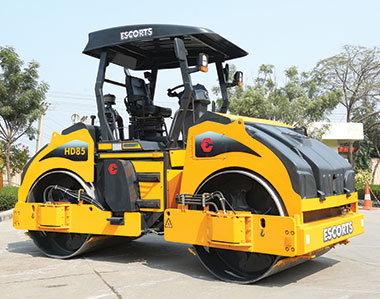 Wealth and livelihood are created by ideas, products/services, facilities and organizations which support the human beings’ ability to create, produce and deliver products, goods and services. Consider the wealth creation impacts of democracy, electricity, farming, automobiles, assembly line factories, mines and other natural resource industries, rail, roads and transportation infrastructure, banks, accounting and legal firms to name a few. All these ideas, products/services, etc. presume the existence of reliable, all weather roads for personal access.

Road transport minister Mr Nitin Gadkari had set an astounding and all-time high target of building 15,000 km of roads in 2016-17 but could only managed 8,200 km of roads. This construction figure, however, is the highest that the ministry has achieved till date and more than double of what the previous UPA government managed. Between 2009 and 2014, on an average 6 km to 9 km of roads were built per day. Gadkari had also set a target of awarding 25,000-km length under highway projects in 2016-17 as compared to 10,000 km last fiscal. He managed to award around 14,000 km by March 31. Though the target was missed, yet the figures hit an all-time high.

Delay in land acquisition and tepid response from private developers came in the way of the ministry meeting its target. But the Centre according priority to roads helped in achieving an all-time high construction and award figures.

From our industry perspective, all the major global players of Road Construction machinery are present in India and with their full arsenal. Today, the focus on road construction in India is like never before. No surprise that Traffic solution consultants, road safety equipment & service providers and knowledge disseminating agencies in road sector are making their presence felt as this is the logical next. The fact that International Road Federation is organizing the World Road meeting in India this year, bears testimony to road sector in India.

As for the statistics/data, the Q1 of the current fiscal saw about 1048 units of Vibratory Compactors sold which was 44% higher than the sales for same period the previous year. This growth was recorded despite demonetization. However, Q2 may see a fall as compared to the above basis due to following reasons: i) Very high sales in June’17 to avoid GST from July’17. ii) Non registration with retail hirers in particular. Iii) Lack of clarity on GST (multiple location registration etc) and preparedness (on line claim of ITC).

This will take some time to sink in and get the small time hirers to get ready. Not to forget the very high rate of 28% of GST which has increased the asset value and thereby the requirement of initial payment (down payment) from the hirers. The impact is going to be temporary and the mark is expected to go up from Q3 and make up for the drop in Q2 by the end of H2. I reckon H2 will see a sale of 2000 to 2200 units plus. A total of 4000 units for the year 2017-18 look possible. This is based on the works awarded/in the pipeline. I am certainly not a Soothsayer.