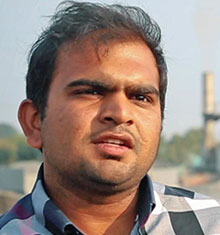 Siddharth-Shah, Director at
RKC Infrabuilt Pvt. Ltd.
Ammann, that produces asphalt and concrete mixing plants, compactors and asphalt pavers at nine production sites in Europe, China, India, and Brazil, has its core expertise in road building and transportation infrastructure. Corroborating the company's claim that its ABA UniBatch Asphalt-Mixing Plant utilizes recycled asphalt, making operations very economical, is Siddharth Shah, Director of Ahmedabad-based RKC Infrabuilt, who asserts, "Ammann ABA UniBatch Asphalt-Mixing Plant is very economical as compared to all other plants. We have been saving great amounts and we have the numbers to prove it."

An ability to utilise recycled asphalt (RAP) in place of fresh aggregate is the key cost saver, plus, ABA UniBatch is able to maintain high mix quality while repurposing the RAP. "The plant provides excellent asphalt mix," agrees Shah. "The baghouse is amazing. The drum is good for recycled asphalt as well. These are the reasons why we bought this plant."

Another specific reason why RKC chose the ABA UniBatch was the plant's ability to add hot and cold recycling material. There is a growing demand for the use of RAP in India, so the plant is a good fit for the Indian market. It's an example of a plant that is built in India, for that particular market, but also utilises European technology.

The plant can also access a foam generator that produces asphalt at a reduced temperature. This low-temperature asphalt (called "warm asphalt" in India) has the same quality as a traditional mix but requires less fuel to produce. Emissions are lower too, and the paving crew is more comfortable working with the lower temperature mix.

According to Shah, the ‘intuitive nature' of Ammann's proprietary as1 Control System makes production of all the mixes possible. "The as1 is an amazing software. I've never seen such a software before. It gives you a total description of the entire plant," he says.

What also pleased Shah is the fact that the ABA UniBatch meets the expected production levels. "Ammann is the only provider that keeps its promised plant capacities," claims Shah.

RKC, which required high production on some large-scale road building projects, is pleased that the plant produced 1,30,000 tons in less than 100 days.

Martinho Fernandes, the commercial manager for Ammann and Apollo plants in India, has reviewed many plants around the world, and is often able to put down numbers on the efficiencies and cost savings of ABA UniBatch plants.

Uptime of the RKC plant is close to 100%. Parts life is extended by 25% because of ABA UniBatch's advanced metallurgy.

The direct-drive system of gear motors reduces power consumption by 10% and maintenance by 20%.

Research and development has led to green technology efforts, including an efficient burner and baghouse that ensure less than 20 mg/Nm3. This also provides customers with additional carbon credits.

According to Fernandes, the plant is ready for the next round of challenges. "The ABA UniBatch is also ‘future ready,' meaning, customers can easily incorporate new technology as it becomes available," he says.