In the press release of HIGHSPEED 2010, He Huawu, the Chief Engineer from Ministry of Railways and Academician from Chinese Academy of Engineering, said that revenue kilometers of China railway will reach 110 000 in 2012, which contains 13,000 kilometers new-built high-speed railways. The rush of infrastructure construction led by High-Speed Rail (HSR) pushes Chinese construction machinery development, especially pile machinery. 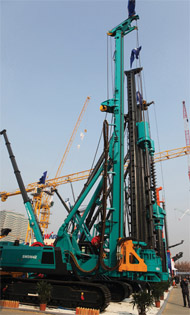 HSR construction techniques are so complex that perfusion piling is frequently required during the whole underground construction. In those constructions, grade A is the standard for all perfusion pile. SUNWARD rotary drilling rig has characteristics of high-speed, stability, safety, agility and in-time after-sale service which could fit the requirement of HSR construction perfectly. What's more, solutions for construction problems could be offered by SUNWARD operation engineers. 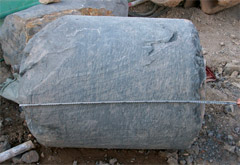 In January 2010, SWDM22 rotary drilling rig successfully finished piling test at the work site of Ha Daqi HSR in Hei Longjiang Province. SUNWARD equipment was the first one to finish pile testing at the temperature of minus 30 degrees.

In May 2010, Lan-Xin HSR construction hugs a rapid development. Its medium bridge locates on a lithosphere, and according to the project standard, the foundation construction of bridge requires more than 30 holes with average depth of 20 meters. SWDM25-S rotary drilling rig successfully drilled into the slightly weathering lithosphere more than 20 meters, thus SUNWARD rotary drilling rig becomes the example of hard rock penetration for its advantage of technique integration.

According to construction machinery experts, Chinese construction manufacturers could improve to be high-end companies with the tide of HSR construction. SUNWARD is one of the leading enterprises among them.

Epiroc is helping customers maximize use of the latest technologies, and developing new ways of raising efficiency and improving sustainability. Its aim is to ensure that customers benefit fully from the ongoing digital