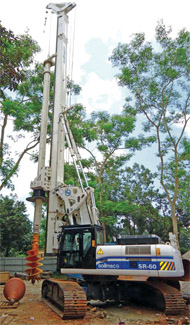 SR-60 performing at Abdul Monem, Bangladesh
After establishing itself as one of the leading players in the domestic market, Soilmec India, a full spectrum provider of foundation equipment for the ground engineering industry, is now in the process of scaling up its international operations, beginning with the execution of key projects across Bangladesh.

Soilmec India recently ensured the completion of the Saibad Water treatment plant project near Dhaka, where stellar machines from the company's marquee, the SR-40, SR-50 and SR-60 were used to achieve the target of increasing the water supply to the town by 22500m3/day within a record span of 3 months.

The company is currently undertaking the active management of two flyover projects in Dhaka. The first project is an elevated highway near the airport, while the other project is a railway crossing project. Both projects entail the use of Soilmec's SR-40 & SR-60 machines that operate with a 1200mm diameter; piling to the depth of is 42-44m.

In addition, Soilmec India has extended the services of its internationally acclaimed green technology, CFA (Continuous Flight Auger) to its customers in Bangladesh also selling one unit of this revolutionary technology in the country. The company has also converted the sale of 7 other machines in Bangladesh.


"We are proud to play a contributing role to the infrastructural development of Bangladesh and be associated with such prestigious projects," said Mr. Sanjoy Chakrabarty, MD, Soilmec India, "Some of the other operational sites at which our SR- 40, SR-50, and SR-60 machines are currently being used include Incepta, Abdul Monem, and Hojgaard," he adds.

Soilmec India received a positive response following its participation at the 14th ConExpo that was recently hosted by CEMS Global in Dhaka, Bangladesh. Keeping in view the proposed infrastructural development of Bangladesh as one of the most promising economies, the company endeavours to serve as a key vendor of foundation equipment with its trademark efficiency and reliability. Already established as a market forerunner in the 400 crore Indian piling industry, the company also aims at expanding its business operations to Sri Lanka in the near future.