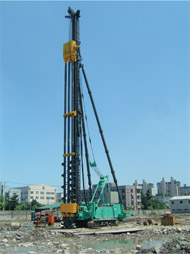 Soil cement-mixing wall method is making the soil cement wall, done in situ by using the multi-shaft auger equipment developed specially by injection of cement slurry from the point and mixing it with the existing soil for making the soil-cement wall. As a soil cement-mixing wall of continual one body, the complete lap being able to point to the bored hole mixing axis of the element edge to the next element, it keeps creating.

SMW method operates the based machine, the earth auger, the screw and the plant which responds to purpose combining with the optimum. For example, when it is the hard ground where the preceding pre-boring is necessary, changing to the single auger screw for pre-boring. SEMW provides different Drilling Tools, the combination of Cutter Head and Shaft form, as per specified soil condition for rapid drilling speed and keep long service life for Drilling Tools.

Soil cement-mixing wall is uniform with the unique mixing mechanism which provides the mixing wing and the traveling wing alternately. Furthermore, the elements are jointed with each other through lap system, it is superior in waterproof charac- teristic in comparison to conventional method.

Little Influence on Circumferential Area of Foundation, no Ground Subsidence 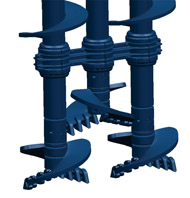 Because of Mixing-agitation with cement slurry is performed in situ earth in order to create the soil cement wall, looseness and collapse of the hole wall quite are little, the influence on circumferential area of foundation such as ground subsidence has decreased.

Because in site earth mixing system with one process, period of works is shorten in comparison with conventional method, and superior in economical efficiency.

As for depth of wall longest for SEMW Super Auger is 55 m.