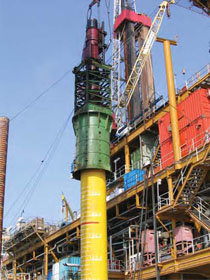 As the most professional pile-driving equipment producer, SEMW purchased and started know-how cooperation with German company for the revolutionary diesel impact hammer in 1984. Thousands of German invented, Chinese made diesel hammers have been built by SEMW, used in China and worldwide at job sites in the past 25 years. More proudly, super-big diesel hammers with SEMW patented has been innovated to domain the off-shore piling projects. Current world-record diesel hammer D250 (ram weighted 25ton) is on active service in off-shore wind mill project. 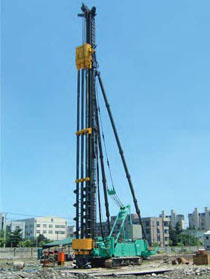 DH558 with ZLD Auger for SMW method in Seoul, Korea

Know-how cooperation with world leading pile-driving equipment producers is the key to success for SEMW. In 1990s, covenant is signed between SEMW and NISSHA (Nippon Sharyo), a Japanese pile-driving equipment producer based in Nagoya. NISSHA NH70/100 hydraulic impact hammer, DH558/ 658 pile-driving rig were authorized to be manufactured in SEMW with Sync-updated Japanese technical support. Hundreds of job site cases have proved the high-efficiency and users friendliness of diesel hammer plus DH558/658, which is popular for every precast piling contractor. Besides that, this heavy-duty designed pile-driver equipped with max. four winches is versatile for different job methods, with flight auger, vibratory hammer, and so on for multiple working devices piling. Or it could even be easily converted into a boom crane.

SMW Method (Soil Mixing Wall Method) is widely used in forming retaining / diaphgram wall for the purpose of containment or water resistance in deep foundation, which is the critical project for skyscrapers basement, subway, tunnel etc. SEMW started the study and business on SMW and achieve the hyper-depth of more than 50m underground. Dighgram Wall Grab and 70ton heavy-duty crawler crane is under test and will be disclosed to the market soon.