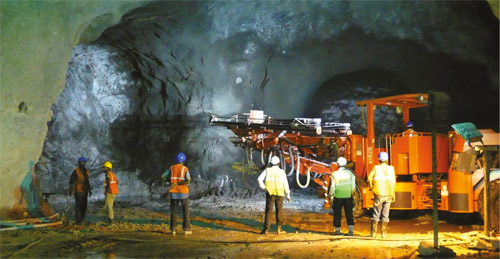 This DT 820 have been used through the construction of India’s first underground crude oil storage caverns, located at Visakhapatnam in Southern India; together with two Sandvik DX 700 surface drill rigs for benching works.

The project is being constructed under a $ 75.5 million contract by Mumbai-based HCC for Indian Strategic Petroleum Reserves Limited, a subsidiary of the Oil Industry Development Board of India under the Petroleum Ministry.

Located at a hill known as Dolphin’s Nose on land belonging to the Eastern Naval Command in Visakhapatnam – Vizag – the scheme will have a storage capacity of 1.33 million tons of crude oil. 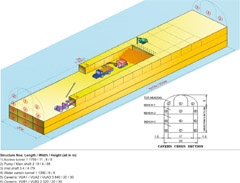 The contractor’s Project Manager, Ramana Rao, confirmed that there are five caverns for the crude storage, all 30 m in height and 20 m wide, together with associated tunnelling. Three caverns are each 840 m long and each is connected at one end to form a ‘w’ shape. Two shorter 370 m tunnels are also joined to form a ‘u’ shape.

Once completed 75 m long x 102 mm dia boreholes were drilled horizontally from both sides of the galleries at 10m intervals, to cover the caverns.

HCC is using the four Sandvik jumbos simultaneously for much of the time, as the drilling and blasting is being undertaken on several fronts.

"Our logistics are designed to supply power and water to four headings simultaneously, and to remove the rock and do the shotcreting," he says. "The four Sandvik machines are therefore working within this cycle."

The crude oil cavern at Vizag is one of three such caverns planned by the Indian Government with a storage capacity of 5.3 million tons. Two other caverns will be at Mangalore and Padur with the crude designed to act as a buffer in the event of emergencies or disruptions in supply. All three projects are scheduled to be operational by 2013.

The Sandvik DT 820 is a two-boom electro hydraulic jumbo for fast and accurate drilling in tunnelling and cavern excavation of 12 to 110 m2 cross sections.

Equipped with an HLX5 rock drill and a TB 90 universal boom, it gives a large optimum shaped coverage and full automatic parallelism. The booms can also be used for cross-cutting and bolt hole drilling. An optional basket boom for bolting and utility works is available. The four-wheel-drive centre articulated carrier ensures rapid and safe tramming with good balance.