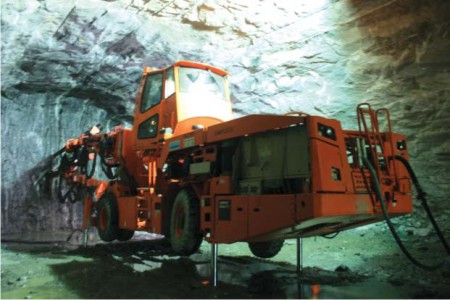 Five Sandvik underground jumbo drilling rigs, including a recently delivered, - Axera T11, are being used by a Brazilian joint venture for tunneling on the 333.7 MW AHE Simplício hydroelectric power project .

AHE Simplicio hydro-electric power project features a series of water channels, tunnels and reservoirs over a distance of 26 km to virtually introduce a new water course.

In total, construction in a 36 month contract, it incorporates eight channels, five reservoirs and four tunnels–including the longest at 6.03 km and featuring six working faces.

Throughout the tunneling operations, the JV is relying on five Sandvik Axera jumbo drilling rigs including an Axera T11 (now known as DT11) jumbo purposeordered by Construtora AndradeGutierrez and two Axera T8 by Construtora Norberto Odebrecht.The fleet also includes a second T11 and a T8 (now known as DT 8) on-rental to the JV; all featuring three booms and TCAD (with the exception of the rental T11).

The Sandvik tunneling jumbo Axera T11 has been designed for fast and accurate tunneling excavation of 20–177 m² and capable of operating in a 10.9 x 18.2 m tunnel.

The Axera T series is built from modular components and offers different size coverage areas and instrumentation/automation levels with operational features ensuring the most suitable unit for each job. 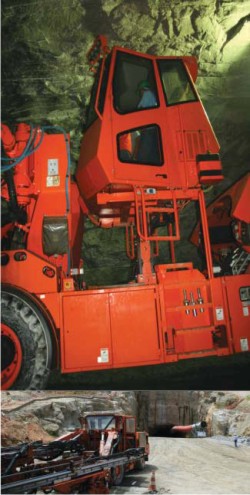 Hydro-electric scheme includes a 30 m high x 270 m wide RCC dam, Spillway, Intake and Powerhouse–which includes two 14 MW turbines.. The new reservoir will cover an area of 12 km² and also feed water into the first channel at the start of the rerouted waterway.

Work was started on the first channel–C1–in April 2008 along a distance of 1.9 km. Featuring a final width of 28 m, the channel will have a water depth of 8 m and flow into the schemes first tunnel.

At 1.458 km long, the tunneling was started earlier this year using the first of the projects Sandvik Axera T8 jumbo rigs drilling from the direction of Channel 2.

To date almost 50% of the preparation of C2 has been completed with more than 100,000 m³ of rock being excavated along the 1 km channel to lead into the first of a series of reservoirs– Reservatório de Tocaia.’ Once again, making use of the topography and a dyke, the valley forms a natural water storage area, before feeding into the 565m Channel 3 and second tunnel T2.

Depending on the blasting sequence, the Sandvik Axera T8 jumbo is used for drilling duties on T1 and T2.

Work is scheduled to begin in April for the start of the short 85m long Channel 4 leading to Tunnel T2A and a 105 m long continuation of Channel 4.

The network continues with a second reservoir ‘Reservatório de Louriçal’ which includes two dykes to hold back water before feeding into a natural channel and onto Channel 5.

With a series of tributaries feeding all the reservoirs, ‘Calçado’ includes a small penstock to release water maintaining a minimum amount into its natural river course A short 73 m long channel feeds into projects longest tunnel, T3. 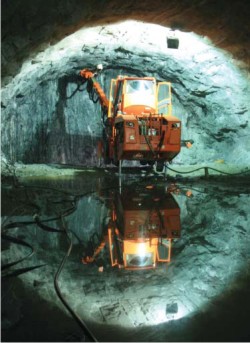 Both access tunnels had been prepared using a second Axera T8 jumbo rig on the 7 m high x 8 m wide access. Throughout tunneling in T3, the JV is relying on four of the five Sandvik ‘jumbos’ with each working on up to two faces. Currently, tunneling is underway on all six faces on the top bench, with a 7.5 m height x 15 m width– in common with all the schemes tunnels.

Once completed, work will begin on the lower bench to a height of 7.2 m to provide a final tunnel height of 15.7 m. The rock type in all the tunnels is gneiss with a typical hardness of 200 MPa.

Tunnel 3 feeds the 202 m long channel 7 serving a third reservoir ‘‘Reservatório de Peixe’ featuring three dykes to retain the water. The flow continues into the intake channel, dropping into 300 m long feed tunnels–one for each turbine over an 80 m drop at a gradient of 12.48%.

After the Simplicio powerhouse, a 760 m long tailrace open channel feeds the water back into the River Paraiba do Sul, more than 26 km down river. 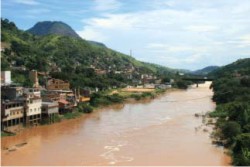 Within the ‘opening’ pattern 16 holes are drilled including three ‘cut’ holes reamed to 102 mm. The drilling pattern typically features 14 ‘foot’ holes across the18 m width and 39 contour holes, with the remaining 66 holes spaced at radii of 5.05 m, 6.25 m and 8 m.

The sequence continues with 1 – 1 ½ hours charging, 40 minutes blasting and ventilation and up to two hours scaling and mucking out. “Generally we aim for 3 blasts a day on both faces inside the tunnel–two on one face and one on the second face,” he said.

He also confirmed that the average life of the Sandvik tools in the gneiss rock was almost 5000 drilled meters for the shank adapter and 2500 m for the H32 rod.

“We are also obtaining 300 m with the drill bits averaging 7 holes before we regrind. In this way we are able to regularly achieve 6–7 regrinds with each bit” he said, adding, “We are more than happy with this roduction rate.”