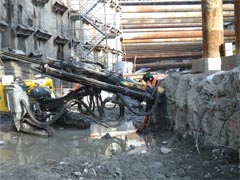 A typical rock bolts consists of a plain or threaded steel rod with mechanical or chemical anchor at one end and a face plate & nut on the other. The threads are usually rolled and not cut, to avoid damages during handling and installation. The rock bolt is tensioned after affixing, by tightening the nut on the face plate. The anchor may be further strengthened using a chemical or cement grout.

Many accidents have occurred, some fatal, due to falling rocks from mountain slopes, tunnels and mines. Some rock strata are inherently weak and tend to fail under slightest disturbance or shock. More often, the rock strata get loosened due to excavations and blasting, which cause fractures in rock, leading to failure.

The rock bolts work by knitting the weak or unstable rock strata sufficiently together before they can move enough to loosen and cause failure. The bolting system is somewhat similar to clamping a number of thin weak layers to a one strong layer forming a composite beam. The binding effect is achieved through frictional forces created by the physical interlocking along the anchor and rock interface.

The type of bolting system depends on the type of rock strata, whether it is hard rock, medium or soft rock and the surrounding environment. Typically, a mechanically anchored rock bolt would tend to loosen in soft rock and in the event of mechanical disturbances such as blasting. The rock bolts can be broadly classified in to following categories, Slot & wedge type; Standard anchor; Expansion shell type; Resin grout; Cement grout; Combination type; Swellex bolts the other special types are Roof truss & Cable sling.