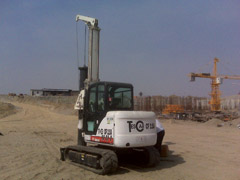 REL (Revathi Equipment Limited), in association with Tescar Srl, Italy, launched the first of its kind Mini Piling Rig in India. The Tescar 'CF' series, well known worldwide for its versatility and compactness, have several features which can revolutionize the Indian construction industry, as far as the Pile foundation segment is concerned.

"We are delighted at the prospects and the response received as the initial results are very much encouraging and also points to a huge saving in the operational costs as well" informed Mr. M Sunil, AVP, REL-construction Equipment Division.

REL forged the association with Tescar, early this year, and the models introduced in India currently brings enormous advantage to the Piling contractors and Rental Agencies handling Hydraulic Piling Rigs. 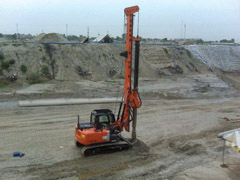 "Presently not available Rotary Rig in India can do bored piles of diameter less than 550 to 600 mm, whereas the quantity of Piles of sizes 400 to 500 mm are increasing at a very high pace in the country, due to the various Power Plants, SEZ’s and other urban development & industrial projects. Contractors are therefore forced to resort to conventional methods with very low productivity in executing these jobs. The REL-Tescar ‘CF’Series comes into play in this segment. The 2 Models CF 3 and CF 6 can start from a Pile diameter of 400 mm onwards and on soft strata achieve depths up to 28 meters” continued Mr M Sunil. “This performance capability is a first of its kind in India and we are sure that the concept will catch on as the Indian construction industry has always been receptive of cost effective, at the same time highly productive solutions. Apart from its ability to do small diameter Piles, the Tescar machines bring along huge savings in fuel costs, transportation costs and also maintenance costs."

The Tescar CF series is a versatile machine with many advanced features such as flanged mast which allows operation under very low head room and its 'Close to the Wall' Rotary design. The machine can also be configured, by adding/attaching Kits for 'CFA', Hydraulic Wall Grab or Drop Hammer, without modification on the Machine. Tescar also has the patented ‘Telescopic’ Mast which allows certain models to operate under very low head room as low as 2500 mm and even inside buildings.

"The first 2 machines in India were offered to a leading construction company for its project near Delhi, and the results indicated 50% saving on fuel and transportation costs, while achieving more or less equal productivity as that of other bigger machines. Another great advantage of the Tescar machine is that the base machine is a Hitachi for which the parts and service availability is not at all a problem in India" informed Mr Sunil. The Tescar machines can also be offered on many bases such as CAT, Bobcat, Komatsu or Tescar’s own base machine.

REL, a part of the Renaissance group headed by Mr Abhishek Dalmia, is a leading manufacturer of Concreting equipment such as Concrete Batching Plant, Transit Mixer, Concrete Pump and Truck Mounted Boom Placers, in technical tie-up’s with leading German manufacturers. Last year REL shifted its manufacturing facility for the Construction Equipment Division to a new ISO certified facility near Chennai and also augmented its own network of offices across the country with 12 after sales dealerships.