The traditional way of seawall foundation construction by fully dredging of soft marine deposits is becoming more difficult in some region like Hong Kong due to the rapidly running out of marine disposal grounds for dredged materials. However, the foundation projects of Yangshan Harbor in Shanghai and Hong Kong-Zhuhai-Macao Bridge (HZMB) are seeking the most suitable solution in most difficult off-shore construction. Sand Compaction Pile (SCP) Method, developed in Japan in 1950 and widely used in Japan and Korea, is the right solution. SCP is one of the methods to strengthen the soft ground and to obviate or reduce the dredging for seawall construction. 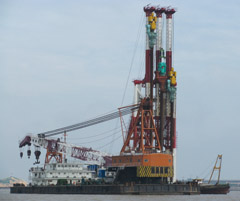 One Barge with three SCP Leader
SCP improves the stability and compressibility of the marine mud/clay by several ground treatment principles including replacement, drain water consolidation, compaction, stabilizing soil and reinforcement. As the installed sand piles and the original clay/mud form a “composite ground,” downward stress from the overburden tends to concentrate on the installed sand piles rather than on the unimproved ground, which is known as “sand pile stress concentration.” The composite ground’s total shear strength is also improved by the presence of the sand piles. Hence, it increases the bearing capacity and improves slope stability. Like band drains, it can also accelerate the consolidation of clay/marine mud by providing short drain paths for clay/mud to dissipate their pore water through sand piles and hence reduce long term consolidation settlement. Closer spacing of SCP (i.e. higher replacement ratio), higher improvement of the strength can be achieved. The spacing and depth of SCP required would depend on the original soil parameters and overburden.

SEMW DZ500
SCP barge, which is positioned by Global Positioning System, can drive the 3 SCPs down at the same time at 350 meters per day per barge. Under the operators’ monitoring in the control cabin, it can construct sand piles 50 meters below the seawater level with automatic and computerized systems including the piling system, the sand feeding system, the barge ballasting system, and an auto-electronic sand level gauge. 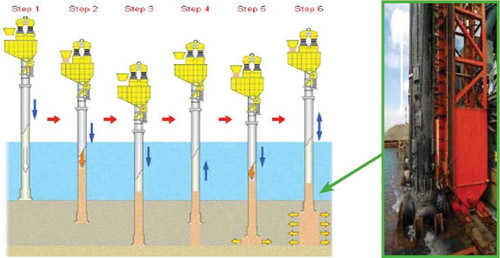 The advantage of SCP is more environment-friendly for less sediment disposal and hence less fills when compared with the fully-dredged reclamation method. SCP method is a mature technology with successful track records in Japan and South Korea, now SEMW brings this technology spreading in Asia and other region in off-shore projects. 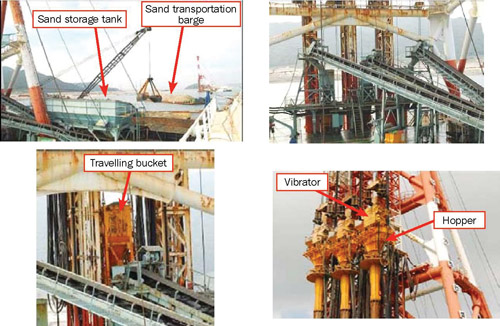