Fourteen Sandvik underground jumbo drill rigs are being used on India's three strategic crude oil storage caverns under construction, in drill and blast duties to excavate more than 9 million m³ of rock from the 24.4 km of tunnels and caverns to store 5.33 million metric tonnes of crude oil. Deputy Project Manager for the S K E&C - KCT JV on the Padur project contract 1B, Prasanna K.M, has stated that the Sandvik rigs represent "the lifeline of the project." 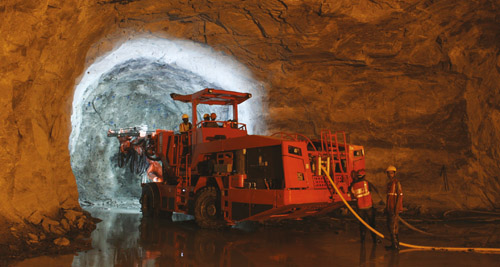 The Padur project has been awarded as two identical packages with Hindustan Construction Co (HCC) winning 1A - the second contract - and relying on three Sandvik DT820's for the underground excavations. The combined capacity of both contracts will total 2.5MMT of crude oil.

Contract 1B
The S K E&C – KCT JV initiated site mobilisation in May 2010 and began tunnelling operations in October and by March 2011, has completed 450 m of access adits and 150 m in the water curtain gallery.

The access adit is being prepared at a gradient of 15º throughout excavations except along the horizontal junctions. Routed 150 m before the first junction to the water curtain gallery, the access portal continues for a further 268 m before opening as a junction to provide access to both ends of the first cavern.

In total, the access adits will be 1900 m long and enter the cavern headings 100m from both ends. Before excavation of the cavern heading can begin however, work must have been completed on the water curtain directly above.

Featuring a 6.5 m wide and 6 m high cross section, the 800 m long gallery will feature 70 x 70 m long x 102 mm diameter bore holes drilled on both sides at an inclination of 10º; to totally encompass the top of all four caverns 40 m below. 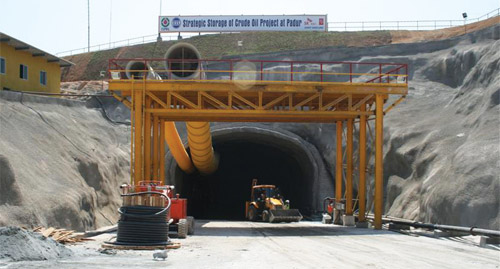 The boreholes will then be sealed and pumped with high pressure water in a continuous recirculatory system at 6 bar to seal any fissures in the rock around the caverns.

The water will prevent seepage of crude oil fumes through the fissures, eliminating the possible risk of explosions.

Caverns
Once the water curtain has been proven the contractor anticipates preparation of the first header of the four caverns by the end of July.

The four caverns are each spaced 20m apart with 1 and 2 connected together as are 3 and 4 to form two 'U' shapes.

During drill and blast operations with the Sandvik rigs, the header access adit continues 20 m through to provide access to the next cavern.

On completion of the 8 m high header, the joint venture will prepare a ramp down to the bench below then cut back to drill and blast the 8 m high bench 1.

A similar process is repeated for each of the remaining two benches to complete the full cavern heights of 30 m and 22 m respectively.

By completion of the caverns, 4 m x 4 m inlet shafts will be excavated into the sides of caverns 2 and 3 together with 12 m x 6 m outlet shafts directly into the crowns of 1 and 4.

Throughout excavation only a strictly regulated 400 mm tolerance is permitted to ensure a smooth wall finish; so as to reduce the possibility of voids filling with crude and the accumulation of vapours.

During tunnelling operations, shotcreting is applied to offer additional support and a smoother surface using a steel fibre mix shotcrete; generally to a thickness of 100 – 150 mm.

Sandvik Tools
All three jumbo rigs are fitted with Sandvik R38/R32 drifter rods and R38 shank with 45 mm diameter button bits to drill 3 m – 5 m deep holes, depending on the rock and specification. 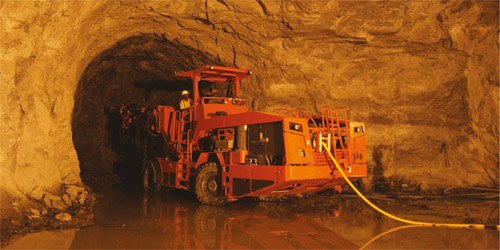 "We have been extremely impressed with the performance of the Sandvik tooling," says Planning & Scheduling Manager, Yong Wan Song, adding, "With on site regrinding, we have been able to achieve up to 200 drill metres with each button bit: regrinding after the first 80m."

Currently, the SK E&C – KCT JV is anticipating a 12 hours cycle during drill and blasting in the caverns. "I am confident that we will maintain this cycle rate particularly when the second DT1130 has been delivered."

The Sandvik rigs are also used with all booms for rock bolting duties.