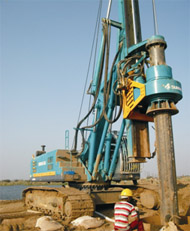 Founded in 1999 by its own independent innovation, SUNWARD has risen rapidly by high-tech strength and modern management and today it is steadily positioned as the China’s top brand and exporting its equipment to 57 countries and regions all over the world. With total assets of over 2.7 billion Yuan (about INR 18.6 billion) and over 2100 employees, the company has developed more than 100 specifications of high performance and high quality products with own intellectual property rights covering the range of excavator, skid steer loader, rotary drilling machines, down-hole drilling rig, forklift, Hydraulic Static Pile Driver, Forklift truck, and so on.

Headquartered in Changsha, the company has set up several subsidiaries in China and abroad. In 2008, Sunward Machinery had launched its equipment in Indian market for the first time, and put its best effort to develop the market by introducing its excellent construction equipment and techniques, building up local service system and spare parts supply system. Sunward has a long-term strategy to manufacture its products locally in India. The company’s participation at Excon 2009 has given good dividends to them and now there are dozens of Sunward equipments such as rotary drilling rigs, pile driver machines etc serving the construction sites in India.

An independent R&D has brought SUNWARD more than 150 patents. The company has innovated not only the designs of machines and components but also the measurements control and systems of electrical, hydraulic, power etc. 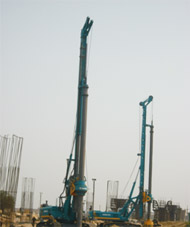 SUNWARD has a full range of excavators with distinct Sunward character from 0.8 to 47 tons, thus becoming the domestic enterprise owning the most comprehensive series of excavators. Now its products are being exporting in batches to developed and developing countries such as U.S., Europe and India. Sunward integrated modern technology of hydraulic pile driving machinery, then developed the rotary drilling rig, a newly drill filling pile construction equipment. With such innovations at its stable and specially designed chassis, excellent electronic control system and novel operate devices that constituting its unique features, it has become the main force of national major construction projects and has well recognized as the most excellent benchmark of Chinese drilling and foundation equipments.

In addition to these, it has also developed dozens of different models of forklifts trucks that are exported to Italy, India, Sweden, etc. With original appearance and reliable performance, SUNWARD has revolutionized the machinery industry by developing the first new concept excavating loader in the world, and the fully intelligent electric excavator which could dance. The new concept excavating loader has also been rewarded the gold award of conceptual design by IDSA in USA. This award has been given for the first time to China machinery industry.

SUNWARD has several subsidiaries in and outside China, more than 20 service offices and global regional fittings depots; marketing service network consists of more than 100 agents that almost cover the whole world. The brand “SUNWARD” has been registered in dozens of countries. The world is full of competitions and challenges, as well as the opportunities and hope and SUNWARD is now more than happy and confident to serve the world.