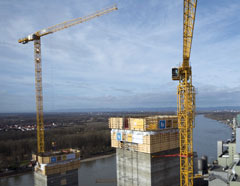 The captivating nature of WOLFFKRAN technology was demonstrated at recently concluded bauma and once again by a pair of flat-top WOLFF 6031.8 cranes at the construction site of the Mannheim large-scale power station.

With a tower height of over 120 m, the two trolley jib cranes soared high into the sky while being braced at only one point respectively. The contract for the work on the two stair towers in block 9 of the construction site was awarded to Züblin AG and its associated consortium. The traditionally red cranes were specially dipped in deep yellow for Züblin. The operation of the giant WOLFF cranes is being supervised on location by BMTI Baumaschinentechnik International.

The available working space on this large construction site in Mannheim was very constricted and necessitated innovative solutions in the erection of the construction cranes. Despite the enormous freestanding hook heights of the two WOLFF 6031.8s, special attention was given to keeping the foundations of each of the cranes as small as possible.

To meet this requirement, the two foundations were ballasted with 140 and 120t central ballast respectively. "These additional weights can simply be removed once the cranes have completed their work, and have allowed us to avoid large foundation footprints," says Thomas Kühner, Crane Foreman at BMTI Maschinentechnik. "This flexibility of the WOLFF cranes is advantageous for power station construction." As recently as late 2009, the company BMTI GmbH in Weiterstadt delivered these yellow WOLFFs to the banks of the Rhine where they were assembled, climbed and braced. The trolley jib cranes are expected to remain in operation at the present site until February 2011.

Hook heights up to 138 m with just one tie

The single tie also simplifies the work involved in the slipform construction of the stair towers. This concreting technique, suitable for especially tall buildings with clean architectural lines, achieves rapid construction rates. The slipform 'glides' on special supporting rods anchored into the concrete and is hydraulically raised in a stepwise manner. Due to the simple bracing method of the two WOLFFs it was only necessary to incorporate a single slipform stop for each crane respectively. "This brings cost and time savings on the construction site", says Kühner.

An investment in the future

The modernization of the power station complex in Mannheim- Neckarau will see the construction of one of the most state-of-the-art and efficient hard-coal fired power stations in the world. After decommissioning of the older plant blocks, block 9 will secure the long-term energy supply for Mannheim and the Rhine-Neckar region and is expected to come online in late 2013. A total of 1.2 billion Euros are being invested in this construction project.