Wacker Neuson has successfully launched its mini excavator in India. 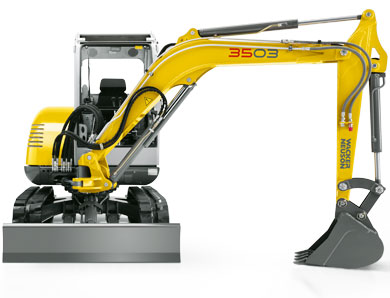 Wacker Neuson, the manufacturer of equipment for concrete compaction, soil compaction, demolition applications, lighting, pumping applications, and various services underlines the importance of the Indian market by presenting proven as well as new products at bauma Conexpo India 2016. The company presented a comprehensive offering of its equipment and has successfully introduced its mini excavator model 3503. The excavators have been time-tested and proven for many years in Europe and North America. With a great deal of power, maximum mobility and extremely user-friendly operation features, the machines were well-received at the show.

"As we want to offer our customers a wide product range complemented with services, which support them in all areas of their daily business, it's only logical to introduce these products in the region," says Mr. Senarat Jayasekera, Regional President for South and South East Asian Regions. The excavators are built in the Wacker Neuson production facility in Hörsching, Austria and fulfill the Wacker Neuson standards in terms of German engineering.

Wacker Neuson representatives were also seen creating a world of experiences for the visitors. They were seen demonstrating its extensive range of products and services throughout the day and garnered favorable attention and interest at the booth.

From an unknown player in the Indian market, Wacker Neuson is now a pioneer in the arena of concrete and soil compaction in enclosed areas having invented the vibratory rammer over 80 years ago and Concrete Vibrators with built-in inverters. The company is optimistically looking towards a further expansion of business in India in the future. With a rich history of 167 years, Wacker Neuson is proud of its high-quality innovation and German engineering since 1848. With their headquarters in Munich, Germany, they are nowadays producing and selling all over the world – constantly with the high German quality and engineering standards.