Volvo India Pvt. Ltd. show demonstrated its recently launched, high capacity range—70 ton "EC700BLC" excavator at its factory unit at Hosakote, near Bangalore. In addition, Volvo displayed the prototype of its G900 series motor grader too, which is being manufactured in Canada and is yet to be launched in India.

According to the company, the products were displayed, keeping the rapid changing requirement of the Indian construction and mining industry in view which demanded higher tonnage capacity equipment, so as to undertake and complete larger volumes of work at a shorter time period. Volvo's clients involving representatives from construction, cement, and mining companies, apart from these banking and financing companies also attended the show demonstration. Partha Pratim Basistha of NBM&CW, one of the invitees to the show, reports.

Among the prime operational characteristics of the EC700BLC excavator, as per Volvo, is its fuel efficiency. The machine derives its unique selling point (USP) based on its less fuel consumption and high productivity standards. Highlighting the USP of the excavator Mr. Mritunjay Singh, Head of Volvo Construction Equipment Business India states, "with cost of diesel passing through frequent price spirals, it has become challenging for construction equipment operators to get smarter margins on their bids, but with better fuel efficiency ensured in the EC700BLC excavators, contractors could now aim at getting better margins on their bids." Strong undercarriage of the excavator enables it to provide greater productivity without going through larger wear and tear, he added. 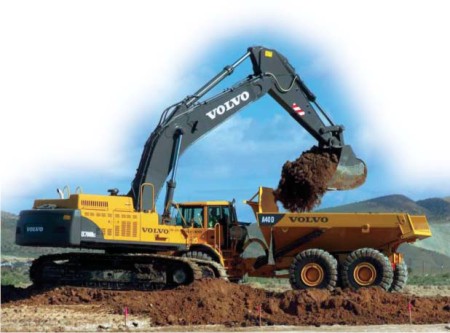 The equipment boasts of having a unique kind of hydraulic system known as "automatic sensing work mode" for high productivity, high digging capacity, and high maneuvering precision. Besides this, the EC700BLC has a summation system of functioning, which combines the flow of hydraulic pumps to ensure quick cycle times and lager productivity. 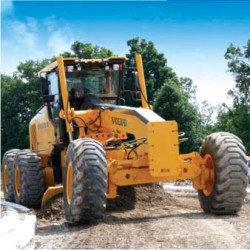 One of the unique feature, it's equipped with computerized tools such as VCADS, MATRIS and Service Contronic, which provides it with a greater competitive edge than contemporary products made by other manufacturers. Mr. Singh added, "The ability of the excavator to analyse any operational problem and suggest a solution via trouble shooting, so as to get the excavator back in operation following a breakdown, is one of the USP of the EC700 BLC."

In addition, the other features of the excavator consist of, harmonized hydraulics, an extra heavy counter weight, and wide long tracks. This is to keep the excavator stable in tough digging conditions offsetting, rocking, and pounding. Further, the robust cap suspension mount dampens vibration and arrests in-cab noise. Show demonstration of the EC700BLC also coincided with demonstration of Volvo's other range of excavators belonging to the 14, 21, 24, 29, 36, and 46 tonne range. The company also demonstrated its wheel loaders and tippers.

Talking about Volvo's future plan of action in providing component and service support for its construction equipment in the country, Mr. Eric Leblanc, Managing Director, stated, "the company has a central warehouse at Bangalore which is supported by components and parts from the regional warehouse of Singapore. Besides, the company has 9 dealers in the country supported by 21 distribution points."

The company would strengthen its component system and distribution network in response to satisfactory growth in volumes of the equipment. Supplementing this Mr. Singh added, "Volvo would tread a much selective approach while selecting a dealer and distributor. The company in no way allow its brand name to be marginalised by that of the dealer and the distributor's brand name as has been the case with other foreign manufacturers in the country."

Volvo, which has sold 600 units of construction machines in the last fiscal, has made a target to sell 720 to 750 units in the current fiscal. The company is bullish on the growth of the country's construction industry.