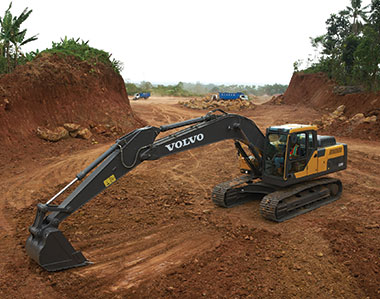 Volvo CE showcased a wide spectrum of industry-leading products at Excon 2017, to highlight its manufacturing strength and the superior productivity of its machines. Its new EC200D excavator, specifically designed for general construction work, features Volvo’s famed fuel efficiency, a bucket breakout force of 123 kN, and an arm tearout force of 96 kN, for delivering high jobsite productivity and fast cycle times.

Also, on display was Volvo CE’s EC210D, a 20-ton rated machine, tailored for heavy-duty applications such as mining and quarry work, as well as general construction. Drawing large crowds was the huge EC950E - a 90-ton rated heavyweight, the largest excavator in the Volvo line, with a maximum bucket capacity of 6 m3, breakout force of 424 kN, and arm tearout force of 408 kN for unparalleled digging performance.

The company also showcased its road building machines such as the P6820C ABG tracked paver; the DD90B asphalt compactor; and the SD110BA soil compactor. The P6820C ABG offers paving widths of upto 10 m and has a 142 kW-rated Volvo engine. Its paving output can reach upto 700 tons per hour.

The DD90B is a 9-ton double drum asphalt compactor which delivers a smooth finish in fewer passes for greater efficiency. The SD110BA is an 11-ton class single drum compactor for earthwork compaction. Both were launched in 2016 and are manufactured at the Volvo plant in Bangalore.

Talking about the demand drivers Mr. Dimitrov Krishnan, Vice President and Head of Volvo CE India, said, “We remain the only major manufacturer present in all equipment sectors: mining, road building, and general. Infrastructure development continues to be the key growth driver in our economy and while the country is making strong progress, there is still much to be done.”

According to him, irrigation is another major growth sector, particularly in the southern states of Andhra, Karnataka, and Telengana, which are seeing a lot of irrigation activities, and many buyers are now looking at equipment for irrigation. “Mining, of course, always sees a certain level of demand, but road cosntruction is driving most of the sales activity, while irrigation is picking up where the main products utilised are the smaller range of excavators.”

As regards value over technology, he said, “I think, today the buyer in India is very sophisticated with a great understanding of the product, its application, and how to extract value out of the investment. There are different types of applications, so I would say that there is a space for technology, for instance, in mining, utilisation of the product is the maximum because you run it 24x7, 365 days, so you need reliability and fuel efficiency more than anything else. If you have asset utilisation which is 90% and above, then everything counts, even the smallest drop of oil. Here, commerce matters tremendously. At Volvo CE, we score high in all aspects in our models. For instance, our EC 950 saves the customer close to 20 litres an hour, which is more than the margins they make with other products. So, the application of high-end technology in a highly productive, high performance application is very, very high, and in such segments technology adoption will be the fastest.”

Mr. Krishnan informed that EC200D is a world premier as India is the first country where it has been launched. It has been customised and developed for emerging markets that do earthwork in a highly productive and fuel-efficient way. The company will introduce it subsequently in other South-East Asian countries. “It is currently imported from Korea but will be eventually indiginized in India. We are already making the EC210D and exporting it to Nepal and other surrounding countries. The EC 200D will start to roll out in 2018-end or early 2019 once the supply chain is in place.”

He added, “In rural applications where the jobs are lighter, and you have enough time to complete the job, machine utilisation will be 8-9 hours a day, so productivity is not a major factor. When machines are used for lower time, fuel costs also matter less. For small jobs here, the cost per hour matters, so if you use technology, it should bring down the cost per hour for the end-user as the cost of owning is impacted. Our EC200D is aimed at such a customer, but our EC210, which is primarily a very productive, high performance machine with its many high-end features, is suitable for a quarry owner who is producing 12-14 hours a day. However, an earthwork contractor will not invest in it as he does not see value in it since his utilization is less. So, in my view, products will sell because there are applications for which those products can be applied. In fact, to a large extent, users define how a product gets displayed and how you extract value out of it.”

“There is a huge market for all kinds of machines. Irrigation alone has multiple applications from basic cleaning of canals to building them. A river linking project can go to a different scale altogether, and will require massive earthmoving machines like the EC 480 or the 950 which are only seen in mining. So, the market will grow as projects get funded and the level of activity goes up.”

To prevent abuse of machines by wrong application or over-use, he said, “We must get the right products that match the applications to reduce chances of abuse. However, the operator community is getting more savvy, and the industry is focusing on upskilling. The sales person must also educate the customer about the machine in the right way if he wants to give the right solutions. One must not blame the end-user alone if he is abusing the machine. The OEM, seller and buyer should be rightly engaged and not make false promises. They must sell the right product for the right application and justify the value that the user will derive from it.”

Sharing his view on the current market focus on Telematics, he said, “I think IoT will impact every industry, but we cannot predict how it will change things. Volvo was the first to introduce Telematics in the Indian market. Our CareTrack is adopted most by our mining customers but we are also looking at adding value to the retail user through our Telematics with a different level of information flow to them. While we have IoT-enabled systems as a standard in all our bigger machines, in retail products they are an optional fitment.”