Telco BHL - Most Reliable and Cost-effective

Telcon is a major player in the Indian BHL market with its two products - TATA 315V and TATA 315E. 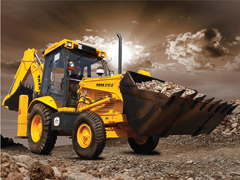 The market for backhoe loaders (BHL) in India has been growing at a rate of over 35%. This was abruptly reversed during the year of 2008-09. The market however turned around smartly and in the past two years, past the slowdown, has shown growth in excess of 40%. It is widely expected that the growth rate of the Indian CE industry for the next five years would be in the range of 17-20%. The growth enablers for this will be the investments in infrastructure - urban and rural infrastructure, roads, agriculture etc.

A number of foreign players have entered into the Indian market with manufacturing facilities and a few new ones are in the process of launching. Telcon is a major player in the Indian BHL market with its two products - TATA 315V and TATA 315E. While 315V is the undisputable Number 1 in the +80 hp class of BHL, the 315E is widely accepted in the market for being fuel-efficient and cost- effective.

Telcon BHLs are known for their lowest cost of operations because of the high quality of components used. Proven components like the Tata 497TCIC engine and the tough ZF axle and transmission make their products the choice of customers. Features like the Power-shift transmission offer a clutch-less operation ensuring a smoother movement, higher site productivity, comfortable drive and lesser loads on the machine components. 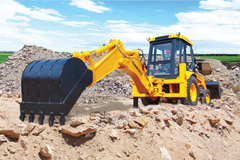 The hiring retail segment is the biggest contributor for the backhoes and this is driven by the increased focus on real estate, urban works and roads.

BHLs are essentially utility machines and the rental rates vary based on the usage and the geography. In general, the average rental rates would be about `650-750 per hour.

The returns vary for customers depending on usage and area of operation but a typical customer would ensure his returns by a period of 36 months. By this time, the customer also plans to dispose off his machine.

Both the Telcon products 315V and 315E comply with BS3 norms and have already been approved by ARAI, Pune. Telcon also offers the most practical and acceptable BS3 compliant engine (TATA 497TC IC) in the BHL market segment today. Currently, there is no mandate for the conversion of earlier BS2 engines in the market to BS3 compliant.

All major players of the world are today in the Indian market vying for a market share. Telcon is known and appreciated by the customers for its reliable and cost-effective products and also wide-spread service through both dealer - Telcon support backed by up economic costing spare parts.