Tata Hitachi has recently launched the ZAXIS 220 LC - GI Series Hydraulic Excavator in Hyderabad in the presence of a distinguished gathering of customers and Tata Hitachi officials. The large audience attending the event appreciated the novel features and offerings of the new product. The ZAXIS 220 LC will roll out of Tata Hitachi's plant at Kharagpur, West Bengal, which is one of the biggest state-of-the art manufacturing facilities in India. 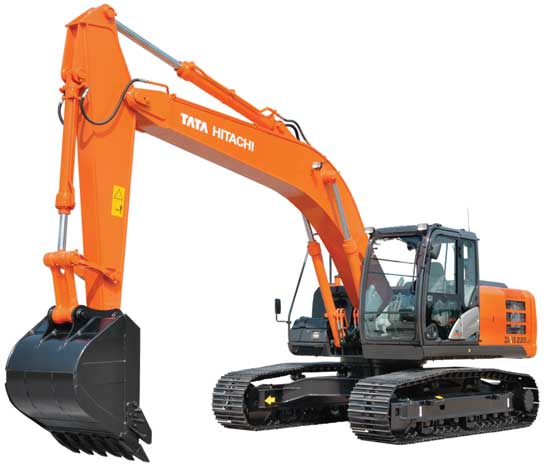 Tata Hitachi formerly known as Telcon (originally a division of Tata Motors) has been in the forefront of the Construction Equipment business since the early 1960s. A technical collaboration with Hitachi Construction Machinery Limited (HCM) Japan started in 1984 for manufacturing world class hydraulic excavators in India. The construction equipment business was made an independent entity in 1999 and over the years HCM acquired stake in this entity (currently at 60%, the rest being with Tata Motors). Telcon is now Tata Hitachi Construction Machinery Company Limited. The new brand identity was launched on 4th December 2012.

The fusion of these powerful identities in the Tata Hitachi brand energizes and revitalizes the company's continued quest to provide quality equipment with the latest technologies to the Infrastructure and Mining segments so vital to the Nation's progress. The company offers a full range of constructive solutions which include Hydraulic Excavators, Backhoe Loaders, Wheel Loaders, Soil Compactors, Motor Graders, Transit Mixers, and Dumpers. Tata Hitachi has the widest range of hydraulic excavators with more than 30 models starting from 2T to 800T capacity catering to Mining, Construction, Quarrying and other Infrastructure applications.

Tata Hitachi is the leader in the Indian hydraulic excavators markets, with a range that straddles the diverse requirements of the customer. While the ZAXIS series excavators address the cutting edge technology segment, the popular EX series is widely accepted in the market for cost effectiveness, easy maintainability and low operating costs. Over the last five decades, the company has always been at the forefront in providing the latest technology, features and customization to the discerning Indian customer. The ZAXIS series of excavators exemplifies this. With pioneering offerings in the hydraulic excavator range, Tata Hitachi has consistently broken new barriers in the evolution of the CE Industry in the country.

Again, in keeping with its stature as the trendsetter in the Industry, Tata Hitachi is now proud to introduce its ZAXIS GI Series of hydraulic excavators in India, through the launch of the new TATA HITACHI ZAXIS 220 LC, a 20 Ton class Tracked Hydraulic Excavator. The new ZAXIS GI series from Tata Hitachi have taken the Zaxis technology to the next level through its features and offerings. The new ZAXIS 220 LC is powered by an Isuzu engine which delivers a huge 170 PS output (14% higher), for achieving higher production in tight job schedules. HIOS-III (Human Intelligence Operating System), which is the latest in Hydraulic Technology offering from Hitachi across the globe, coupled with the Isuzu engine has helped in increasing the fuel efficiency by 10% and in swifter operations. ZAXIS 220 LC has been designed with a rock- solid undercarriage, sturdy upper structure and reinforcements on front attachments which have resulted in enhanced durability. The operators' cabin has been designed with special focus on operators comfort, safety and ergonomics.

ZAXIS GI series features such as on board ICX (Data Controller) and Global e-service, enable data downloads, machine location identification and machine maintenance and performance monitoring by the customer. Features such as Auto Idle, Power Modes, Work Modes and longer change intervals of consumables enable the customers in achieving significant savings in operating costs. ZAXIS 220 LC also goes green, by its environment- friendly ISUZU Engine conforming to US EPS Tier 2 and European EC Tier 2 standards, and consumes optimum fuel as per the work requirement. Tata Hitachi recognizes the need to offer speedier, more efficient and cost- effective Construction solutions to a nation on the cusp of rapid growth. This product is focused on quicker completion of work cycles through its increased productivity so that projects can be completed speedily.

With the launch of the ZAXIS GI series, the Indian construction scenario would take a quantum leap into a new dimension of excavation work in Infrastructure applications. The Zaxis GI series of Excavators will mark the beginning of a new era for Tata Hitachi as ZX 220 LC will cater to the Indian as well as the global construction equipment markets through exports.