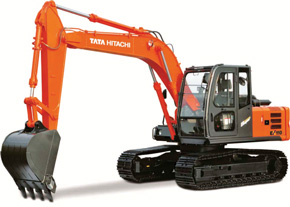 Tata Hitachi Construction Machinery Company Pvt. Ltd. recently launched the EX110 'Super' Series Hydraulic Excavator at its manufacturing plant in Dharwad, Karnataka in the presence of a distinguished gathering of customers and officials from Tata Hitachi. The large audience attending the event appreciated the contemporary features and offerings of the new product. The new Super series of EX110 will roll out of Tata Hitachi's plant at Dharwad.

Tata Hitachi Construction Machinery Company formerly known as Telcon (originally a division of Tata Motors) has been in the forefront of the construction equipment business since the early 1960s. A technical collaboration with Hitachi Construction Machinery Limited (HCM) Japan started in 1984 for the manufacture of world-class hydraulic excavators in India. The construction equipment business was made an independent entity in 1999 and over the years HCM acquired stake in this entity (currently at 60%, the rest being with Tata Motors).

The company, a leader in the Indian hydraulic excavator market, offers a full range of constructive solutions that straddles diverse requirements of its customers. This range includes hydraulic excavators, excavator loaders, wheel loaders, soil compactors, motor graders, transit mixers, and dumpers. Tata Hitachi has the widest range of hydraulic excavators in India with more than 30 models starting from 2t up to 800t capacity catering to mining and infrastructure applications. While the 'ZAXIS GI' series excavators address the cutting edge technology segment, the popular 'EX' series is widely accepted in the market for cost effectiveness, easy maintainability, and low operating costs.

Over the last five decades, the company has always been at the forefront in providing the latest technology, features, and customization to the discerning Indian customers. With pioneering offerings in the Hydraulic Excavator range, Tata Hitachi has consistently broken new barriers in the evolution of the CE Industry in the country.

The EX100/110 with an installed machine base of over 10,000 machines working in a wide variety of applications and in various geographies across the country has consistently been the leader in its size class for over two decades. This has been a standing testimony to the machines' superior performance and unmatched durability. The EX110 brand has remained young, vibrant, and relevant through regular transformation and changes in tune with the changing customer expectations. The uncomplicated design, ease of serviceability and resilient structure to handle tough job conditions, while retaining the core of its hydraulics of this tough machine, has made Tata Hitachi EX110 the favourite choice of its customers.

Following the highly successful launches of the EX200LC Super and EX70 Super, Tata Hitachi is now introducing the 'Super' Series of hydraulic excavators in the 10t segment, through the launch of its EX110 Super.

Technological advances are limitless. The better and more reliable an excavator's hydraulics, the better and more efficiently it gets the job done at less cost. Hitachi's original Optimum Hydraulic System, at the core of the EX110 Super allows for easy, smooth, and swift combined operations, which translate into a superior machine performance. Advanced features such as the fuel saving pump system and cross-sensing summation system help in higher working speeds and controlling energy losses.

The EX110 Super with additional improvements is tailor-made to match the Indian operating conditions. A result of Hitachi's world-class design and R&D expertise, it displays unparalleled versatility with its compatibility with a wide variety of attachments and the many variants it has on offer. The EX110 Super sports a new and ergonomically designed roomy cabin amongst a host of aesthetic design improvements, which help in boosting the efficiency of the operators.

Powered by the reliable and fuel-efficient Tata 697 NA engine, the EX110 Super now comes equipped with the power mode selection feature, which makes optimum use of the engine horsepower by sensing the changes in the engine speed that occur with each new load. Depending on the job, operator can suitably select the mode to match the operating need, resulting in fuel savings.

The new and improved EX110 Super also comes with contemporary feature enhancements such as the Auto Idle and default Auto Deceleration, which provide an increased saving in fuel, thereby lowering customers' operational costs.