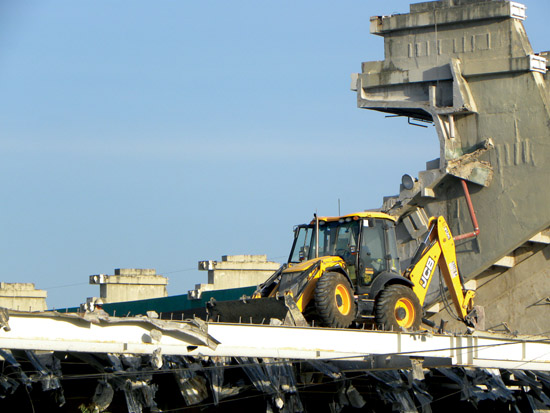 A fleet of JCB machines is hard at work on the other side of the world helping kick off preparations for the 2014 World Cup.

The machines - backhoe loaders and Loadall telescopic handlers - have been pressed into service at the Governador Plácido Castelo Stadium in the city of Fortaleza, Brazil. They are working on a major project to extend the stadium, which will host six games at the FIFA 2014 World Cup. JCB is the world market leader for both backhoes and telescopic handlers.

The machines working on the project include JCB 535-125 and 540-170 Loadalls, a 4CX backhoe loader and a compact 1CX backhoe. The four machines have been joined by a 3C backhoe manufactured at JCB's plant in Brazil.

A JCB spokesman said: "JCB machines have played a big role in developing stadia for many high profile sporting events over the last few decades and we are delighted that our world-beating backhoes and Loadalls are taking centre stage in Brazil ahead of the 2014 World Cup."

The Brazilian stadium is being expanded to host up to 67,000 fans by the time the tournament kicks off in June 2014. Two JCB customers are helping to achieve this goal – carrying out demolition and materials handling work on the project.

Using the backhoes, AMP Locações is responsible for the demolition of parts of the existing stadium. The JCB 3C and JCB 4CX backhoes have been equipped with hydraulic breakers to demolish the stadium's upper cover. The compact dimensions of a JCB 1CX backhoe loader are proving useful in accessing the confined spaces of the lower tier, stripping out seats within the stands. 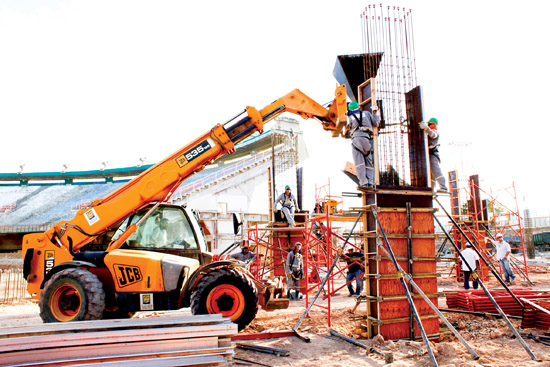 MG Porto, which boasts a fleet of more than 15 JCB machines, has bought two JCB Loadall telescopic handlers for the refurbishment of the stadium. The JCB 535-125 model is handling the large volumes of palletised materials delivered to the site for the construction process. A 540-170 model has been fitted with a radio controlled access platform to enable workers to reach the higher levels of the original stadium, where some of the existing access ways have already been demolished.

The two companies are both customers of Equimáquinas – JCB's dealer in the region. Equimáquinas is providing all machine backup, service and support on the site to ensure minimum downtime so that the strict project deadlines are met. According to FIFA, the construction of Castelão is currently running ahead of schedule.