Indian Construction Equipment Market Light at the end of Tunnel

The Indian construction equipment market has been volatile for the last few years. After an unprecedented four-fold growth in four years since 2003, the construction equipment demand in India exceeded 50,000 units for the first time in 2007, but declined by nine per cent in 2008 in the wake of the global economic crisis and witnessed a further drop of 11% in 2009. 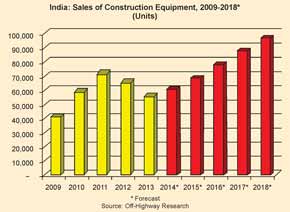 The market recovered strongly with a growth of 45% in 2010 and 22% in 2011, when it peaked at 72,197 units. However, limited access to long-term finance, high inflation, delays in policy decisions and statutory clearances for infrastructure projects adversely affected the sales leading to a market declined by eight per cent in 2012 and a further 15% drop in 2013 to settle at 55,946 units.

In terms of the number of units sold, the Indian construction equipment market is dominated by six machine types. Of these, backhoe loaders, crawler excavators and mobile cranes together accounted for 78% of total market in 2013 against 74% in 2008. While the combined share of mobile compressors, compaction equipment and wheeled loaders decreased from 19% in 2009 to 18% in 2013, the share of remaining equipment declined from seven per cent in 2009 to five per cent in 2013.

The market structure has remained more or less unchanged for the past five years, but vast differences are noticeable while evaluating the performance of individual products. The share of the most popular product, backhoe loaders, grew from 38% in 2009 to 50% in 2013, while crawler excavators, considered to be the most important machine for infrastructure building, declined from 20 to 18% during the same period. 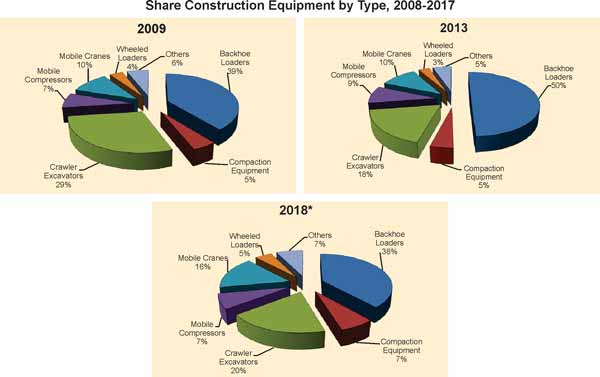 Off-Highway Research forecasts the crawler excavator to be the fastest growing equipment type, which will account for 29% of the market in 2018. Backhoe loader will continue to be the most popular equipment, but its share will decline to 39% and that of mobile compressors to seven per cent. No change is expected in the contribution of mobile cranes and compaction equipment, while some growth is projected in the shares of wheeled loaders and other equipment.

The current state of the market can be summarised as follows:

Of the six major machine types that dominate the market, sales of four products declined in 2013, one remained almost flat while the sixth showed an upward movement. Their cumulative sales fell by 17% in 2013, while the combined sales of the remaining machines increased by 10%.

The Winners: The market for ten equipment types declined in 2013, while six equipment types recorded gains. The highest growth was noticed in rigid dump trucks, which grew by 45%, followed by mini excavators at 24%, mobile compressors at 13% and skid steer loaders at 11% while asphalt finishers increased marginally. 10 units of articulated dump trucks were sold in 2013 against no sales recorded in 2012.

The Losers: Among the losers in the market for major equipment types, mobile cranes declined by 32%, crawler excavators by 26% and backhoe loaders by 14% in 2013. Wheeled loaders fell by six per cent and crawler dozers by three per cent and motor grader sales declined by 13 per cent. Crawler loaders, wheeled excavators and RTLTs recorded a 67, 42 and 11% drop respectively but on insignificant sales volumes. 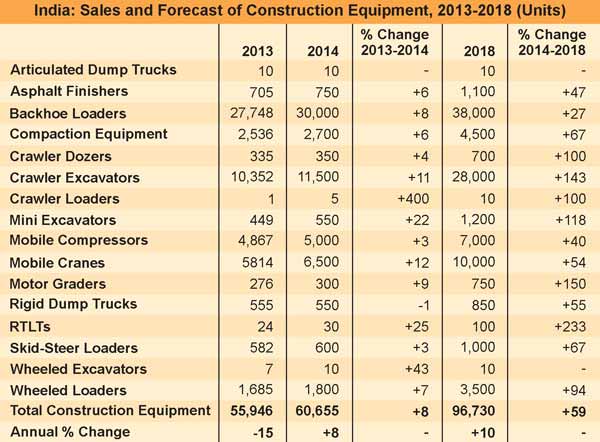 Although the Indian economy has shown lower than expected growth in the last two financial years, the situation is predicted to improve in the future. Major challenges for the construction equipment market did arise from delays in policy decisions, which are often set aside as the government struggles with a wide number of social and political issues on a daily basis. Major non financial constraints include problems related to land acquisition, and procedural and approval delays, especially for environment and forest clearances.

The government has been slow in reforming its regulatory and administrative structure, and this has resulted in the on-going gap between the planning and execution of all infrastructure projects. The continual allegations of corruption charges being faced by several political leaders, and the incoherence within the ruling coalition on development issues, hampered decision making at every level in the government. 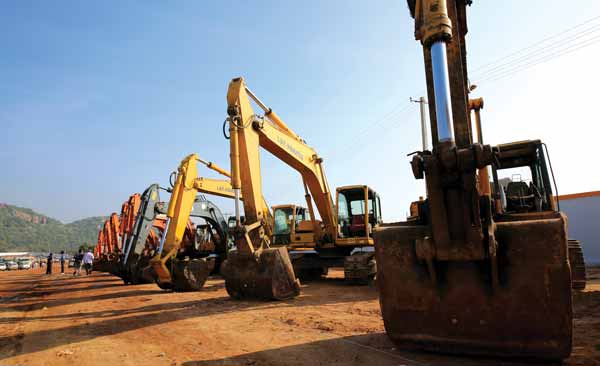 Other challenges mainly come from the widening current account and fiscal deficits, though the government in its interim budget presented in February 2014 did try to address these issues. The Reserve Bank of India is pursuing its high interest rate regime that was put in place to tame inflation during 2010-2012, but the new government, expected to be in place by the end of May 2014, may have a second look at this policy.

Some infrastructure projects were cleared recently on an adhoc basis, but it is expected that after the general election, scheduled during April-May 2014, the situation may turn favourable for infrastructure growth. In the long-term, it is understood that the government's obligation to bridge the massive infrastructure deficit in the country will outweigh all other unfavourable factors, hence despite this prevailing uncertainty, most construction equipment suppliers are optimistic about the future growth. Off-Highway Research is bullish about the future growth of the construction equipment industry in view of the high potential that exists in the country. The simple truth is that there is a massive amount of work to be done in every sector, and this will call for large volumes of equipment to complete it. How large those volumes will be is totally dependent on government's effectiveness in facilitating project execution and addressing the key impediments highlighted above.

Almost all types of equipment will witness growth, though the market will continue to be dominated by the six most popular products: backhoe loaders, crawler excavators, mobile cranes, mobile compressors, compaction equipment and wheeled loaders. Together these will account for 94% of the market in 2018.

Importantly, demand for equipment that has sold only in small numbers in the past, such as mini excavators, rough terrain lift trucks and skid-steer loaders, may also increase considerably. The demand for less frequently purchased equipment such as articulated dump trucks, crawler loaders and wheeled excavators will be driven by specific orders and no future pattern can be predicted for them with any degree of certainty at this point in time.