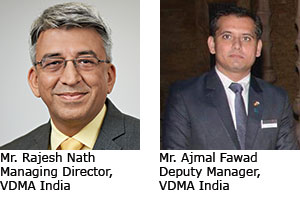 Germany is known globally for its engineering technology. The German manufacturers are internationally well positioned with their broad range of sectors: In 23 out of 31 comparable sectors, they are among the global top three; in 14 of which, they are in first place.

India is the second largest sales market in Asia for the German engineering industry. Germany’s total investments into India during April 2014 to March 2015 amounted to $1,125 million, accounting for over 3.6 percent of total Indian investment inflows in that year. Top sectors attracting FDI inflows from Germany are Automobile industry (20.6%), Services Sector (15.9%), Construction (infrastructure) activities (15.6%), Industrial machinery (6.2%), and Drugs & pharmaceuticals (6.2%). These top 5 accounted for about 64.5% of total inflows from Germany during the last fiscal.

Following a good start in the beginning of the year, the upward trend has continued both in the Construction Equipment and the building material machinery industry. The sector expects to increase its total turnover by 5 percent by the end of the year to around 14.6 billion Euros.

Especially for construction equipment manufacturers, business has been much better than expected at the beginning of this year, both in Germany and on the international markets. This is true for all sub-sectors, namely earthmoving, civil engineering, tunneling, building and road construction machines. In addition to the good business development in Europe during the past years, demand is now also picking up in world regions that have performed weakly most recently, like for example China or Russia. The companies are pleased about this simultaneous push but it also presents new challenges for them. Some of them reported having supply bottlenecks on the supplier’s side already.

As in 2016, companies benefited from their strong position on the European, especially on the German market. After an already strong 2015, the domestic market grew by another 20% and achieved a level almost as high as in the record year of 2007 with sales of the German industry on the domestic market amounting to 3 billion Euros.

Asia is showing good impulses. After four years of decline, China has seen another return to growth in 2016. The Indian construction equipment market increased by 30%, powered by strong investments in road construction. Also in 2017, this sector will keep growing. Experts of the industry estimate South-East Asia to show positive signs, especially in Indonesia and Myanmar. In the Middle East, a substantial turnaround is however not expected.

Despite all heterogeneity, German manufacturers of building material plants are expecting a broadly-based boost this year. Even at the end of 2016, the orders received in most subsectors had risen considerably compared with the previous year. In 2016, after several years of decline without any real impetus, German manufacturers of building material plants recorded an 8 percent rise in sector sales compared with the previous year, totalling EUR 4.7 billion. The increase came above all from international business. At the same time, there was a rise in new orders of about 20%. These, too, largely came from international customers. The United States continues to be the biggest sales market for building material machines from Germany, followed by China and Russia. This good situation, however, does not indicate any substantial boom. It is mainly due to several large-scale orders that have mathematically boosted the industry as a whole.

Nevertheless, the industry is optimistic about 2017. Europe’s construction industry should develop robustly, growing by an estimated 2 percent, with Germany and the UK as the greatest stimulants. Good market opportunities are also discernible in the United States and in some emerging economies, such as India and Indonesia.

Looking into the future, there is a critical importance of a supportive EU policy framework to master the digital transformation in both industries. While highly advanced digitized machines are already mainstream in both industries, the actual uptake of such technologies is still low in European agriculture and the EU’s construction sector. At the same time, and with technology evolving fast, both sectors need to master the bigger digital transformation to remain globally competitive. To do so, a supportive EU policy framework and a business-friendly Digital Single Market will be essential.

Many German companies have either set up or setting up manufacturing units in India in addition to the sale and service office. Several German companies and VDMA members are planning towards more investments in India. German construction equipment and building material machinery manufacturers like Liebherr, Schwing Stetter, Putzmeister, Wirtgen, ZF, and Thyssenkrupp to name a few, have invested substantially in the last 5 years.