JUNGLI by Escorts is the new rough and tough backhoe loader designed and developed for hazardous sites and rough strata. The machine’s higher productivity coupled with better fuel efficiency reduces the operation cost to make it the best for specific application along with having eye-catchy combat color of battle tank.

"Designed and developed for tough strata, Escorts Jungli has caught the attention of customers not only for giving higher productivity and energy efficiency but also for its eye-catching combat color of battle tank," says Mr. Rajinder Raina, General Manager-Marketing, Escorts Construction Equipments (ECE)

We must meet the challenge rather than wish it were not there. Excavation of hard strata is not an option but a necessity at many a sites. For us, this challenge offered an opportunity. There was but just one maxim to live by: "when the strata get tough, only the tough gets going". This, in short, is how Escorts JUNGLI, the new Backhoe Loader was conceptualized.

Escorts JUNGLI is the new rough and tough backhoe loader designed and developed for hazardous sites, in particular. While doing so, the cost of operating/fuel efficiency of the engine can't be lost sight of. The machine's higher productivity coupled with better fuel efficiency reduces the operation cost to make it the best for the specific application. 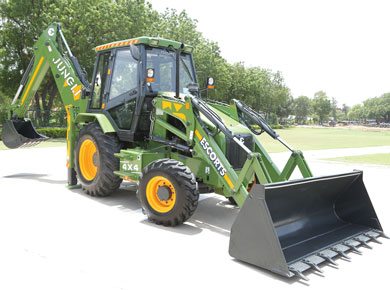 JUNGLI is a 76 h.p, 4 wheel drive machine with its specially designed bucket made of special steel with hard faced stiffner plates and hardox side cutting blade material for cutting into hard strata. Its heavy-duty structure fabricated out of high tensile steel, better dump height & ground reach, a higher backhoe bucket capacity, and higher bucket break out forces & loader arm break out forces, give JUNGLI a competitive edge over other backhoe loaders in the marketplace.

The four-wheel drive makes it versatile for all types of underfoot conditions. The turbo-charged engine has an inline fuel pump that offers a very high abuse value, given the fact that the site conditions for which the machine has been designed are expected to be hostile terrains. The machine has caught the fancy of the customers with its eye catching combat colour of a battle tank. It reflects the 'brute" look and force of the machine and the way it has been positioned in the marketplace. The initial reports are very encouraging as we monitor the performance closely.

Escorts gave the Indian market its first Backhoe Loader and has now brought the ultimate product. We are sure it will break new grounds, especially in tough and hazardous sites, as it is inspired by the Make In India concept being promoted by the Government.