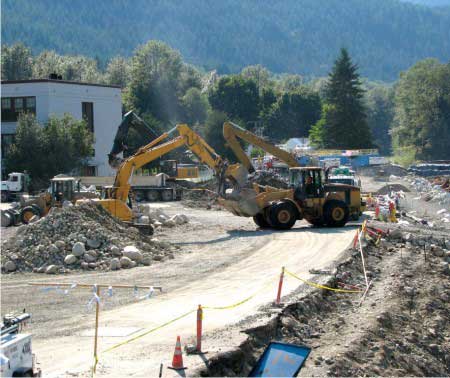 Earthmoving equipment, pertaining to excavators and loaders are witnessing a spurt in improvised technology, all to enable construction companies have better margins on their investment. P. P. Basistha & S. A. Faridi explore the details.

With Greenfield construction activity continuing to happen across the value chain, ranging from core construction to real estate, irrigation, urban renewal projects, and so on, demand of earthmoving equipment remains at an all time high. Sizeable contribution is being made by the earthmoving segment to the overall growth of the equipment industry, which as per the industry estimates is growing at an estimated rate of 25-30 percent. And to highlight their brand image well in the growth torrent, manufacturers are sparing not a brow of their sweat in inducting newer technology in their product line. 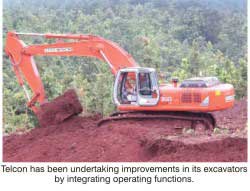 With manufacturing a versatile range of excavators, beginning from 2 tonnes to 120 tonnes both for the Indian and European markets, Telcon enjoys a 55 percent market share in the Indian excavators market. The company has been carrying on technological improvements in its product category on a sustainable basis.

Technological advancements in our products are characterized by making holistic improvements in the machines for their optimum performance. This is as per the superior Japanese engineering technology from Hitachi. The advancements made, are not restricted only by increasing the size of the bucket or making the boom stronger and in turn increasing the overall weight of the machine for better performance, as per conventional manufacturing and product placement perception,”says

He says further “our idea of making improvement in the machine is primarily by integrating all its operating functions, the function of the engine with the boom, engine with the undercarriage, and so on.” Improvements have been carried out to reduce the overall weight of the machine to make it more flamboyant in its performance, while at the same time making it highly productive for its functions. The reduced overall weight of the machines as a consequence minimizes its fuel consumption and checks its lopsided performance.”

According to Mr. Raje, Telcon machines have inbuilt rugged undercarriage and heavy duty structures for the machines robust performance apart from being equipped with advanced hydraulic systems. The excavators also offer electronic diagnostic and data logging systems for tracking the equipment’s usage. The machines are fuel-efficient and come with Euro-3 pollution norms, making the machines environment-friendly both for usage in India and the other markets.

The Swedish construction equipment major has around 13 percent share in the Indian excavator market. Volvo imports its excavators from South Korea for the Indian market. The company has both medium and heavy sized excavators to offer. However, the target customers of Volvo for the Indian market remain the prospective users of 40-60-70 tonnes capacity excavators. The company has been undertaking essential technological improvements in the upper segment category. Although, advancements has been made in the other segments as well.

Says Mr. Mritunjaya Singh, Vice President, Volvo: “We have always laid emphasis on technology, that goes on to reduce fuel consumption, so as to enhance the return on investment for the buyer. In accordance with this practice, our latest innovation is induction of latest Euro-3, exhaust gas regeneration engine (EGR) in all our earthmoving products consisting from excavators loaders, haulers, loaders et al.” The EGR engine arrests the emission flow and puts it

back to the engine. This saves the energy and ensures fuel efficiency during function of the machine.

Other improvements in the Volvo excavators informs Mr. Mritunjaya Singh are in the form of computer tools such as “Volvo Computer Diagnostic Tool” (VCADS), Martis and Service Contronic. One of the recent advancements being carried by Volvo in its excavators has been incorporation of “Volvo Tooth System design” (VTS). The utility of this design, Mr. Singh says “the tooth would be able to self–sharpen itself during the function of the excavator without getting blunt.” 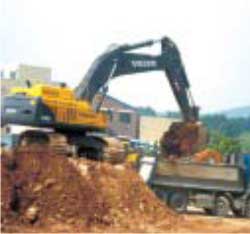 Other functions include boom priority and arm priority. The former, gives priority to the boom operation for faster raising when loading and performing deep excavations. While the later function gives priority to the arm operation for faster cycle time in leveling for increased bucket while filling. One of the unique features of the EC700 BLC is its trouble– shooting system which detects and analyse the engine problem during the course of operation and thereby suggests its solution to get it back in operation.

The inbuilt features of Volvo’s 70 tonne excavator comprises harmonized hydraulics, an extra heavy counter weight and wide long tracks. This is to keep the excavator stable in tough digging conditions offsetting rocking and pounding. In addition, the excavator comes with robust cap suspension, so as to arrest vibration and arresting in-cab noise.

Carrying out improvisation in the product features has been a sustained practice at JCB. However, now this has been dovetailed with promoting newer products for the Indian market and by incorporating technological operational feature advancements into the same for the market leader in backhoe loaders.

In accordance with this, the company’s newly promoted tracked excavator, JS 210 comes with X–type under carriage. Elaborately, this consists of heavy duty apex design, sealed track chain and scalloped drive sprockets for extra life. The machines also have advanced management systems for constant monitoring of machine and gathering of usage information.

On the advanced product features in its excavators Mr. Amit Gossain, General Manager, Marketing, JCB India Limited says, “the technological advancements made in the operation systems of our excavators allows us to place the product much more competitively among the other product counterparts in the country”

JCB’s excavators are manufactured in its heavy line facility at Pune. The company is looking to enter the heavy capacity excavator demand market in India. This is so as to cater the demand of the market which is moving towards the higher capacity excavators in a large way. 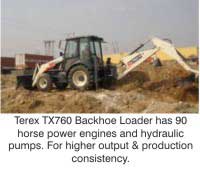 Terex Vectra has been manufacturing its TX760 backhoe loader for the Indian construction market. The company plans to launch its different capacity of backhoe loader and earthmoving equipment for the Indian market. However, as of now the company remains focused on its sole product line the TX760 for the market. According to Mr. Amit Sood, General Manager, Marketing, Terex Vectra,“ the TX760 machine has got sufficient advanced features giving it an edge in the market.”

One of the innovative features of the machine, Mr. Sood highlights, the pilot operated unloading systems. This senses the load requirement during the digging performance, based on which the engine applies the load to the boom and the arm. As a reason of this system the pressure on the engine remains balanced”. Further, the machine has 90 horse power engines and hydraulic pumps. This enables the loaders to provide higher output and production consistency.

According to Terex, the TX760 has twin gear pumps for reliability. Power boost to match digging power and speed to application. The machine has hydraulic oil coolers to reduce operating temperature and tilts forward for easy cleaning.

Mr. Sood points out that the machine has rotor welding for superior design. The machine, which adheres to Bharat- 2 emission norms, has better visibility with adjustable steering and seats in place among other features. 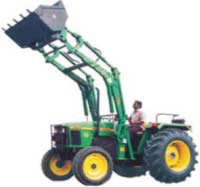 According to the company, the attachments have been manufactured to suit the cost conscious Indian market. The attachments, fitted into tractors can be utilized for all range of construction activities, ranging from small housing project sites to major infrastructure projects.

The front–end loader manufactured by the company can be operated in all construction sites. Tractors above 45 horsepower can be fitted with the front loader attachment irrespective of the tractor engine condition. The attachment can handle upto 1200 kg of material. This can be lifted and unloaded up to 13.12 ft dumping height.

The backhoe dozer attachment of Bull offers its utility in terms of dozing and land leveling with the same tractor, which as per the company is not possible with existing dedicated backhoe loaders. The backhoe dozer attachment can excavate and load trolleys and dumpers with upto 11 feet height above ground level and can dig upto 11 feet below the ground level.

While the Bull backhoe with loader attachment offers its advantage through carrying out excavation 1200-1700 cu ft of soil at the rate of 75 percent capacity utilization per hour. The attachment has low maintenance and retention cost. With the attachment fitted, the diesel consumption of the tractor would be around 4 litres per hour. According to Bull, the backhoe loader attachment is ideal where work requirement in excavation and loading of soil in dumpers/trolleys is upto 16,000 cu ft in one day.

With the construction market reviving, manufacturers are gearing up to offer more value to the end-users with tech-enabled, robust machines that come with numerous attachments for specific applications

With sales of wheel loaders slowing down, manufacturers are beginning to focus on enhancing their product service and support, and engaging with customers more proactively. NBM&CW reports.