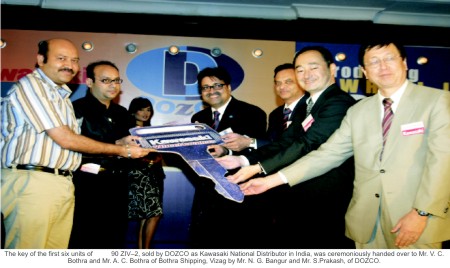 DOZCO (INDIA) PVT. LTD. launched Kawasaki Wheel Loaders at a colorful ceremony at Visakhapatnam. The well-planned and well-organized ceremony had a selective and distinguished gathering consisting of renowned customers/users and contractors in the field of mining and construction industry, well-known financiers for equipment and revered advisors and consultants in the HEMM sector. Kawasaki Heavy Industries Ltd., Japan was represented at the event by the Sr. Manager, Sales Mr. Masahori Mikami who flew from Tokyo for the ceremony and was joined by Mr. Masaki Ishijima, Chief Representative in India.

The newly launched and sold Kawasaki's wheel loader bearing a model number 90ZIV-2 and has a bucket capacity of 3.2-4.2 cubic metre with engine power of 191kW(256hp) claims to be competitive owing to rugged features, fuel efficiency, and less down time, making it productive. The equipment has a Nissan “PE6T” diesel engine and a large fuel tank of (320lt) for longer and continuous operation.

Addressing this gala event, Mr. M. Mikami expressed satisfaction to have DOZCO (INDIA) PVT. LTD., whoare the leading Importer and Distributors in HEMM and Spares are presently running on its 'Silver Jubilee Year,' as their Distributor in India and was confident about their ability to handle and meet the desired level of customer service backed by their experience and network. DOZCO has to its credit the recognition of being 'Best Dealer' with high satisfactory rate of after sales service having over 95% guaranteed spares availability from its overseas principals.

The machine has a direct injection, turbo charged engine for low fuel consumption. The equipment comes with a load sensing steering system, ensuring that only the required oil quantity is supplied to the steering circuit (takes priority over loading circuit) so that the light touch steering is ensured even at low engine speeds. When steering is not required the full discharge from the steering oil pump is applied to the loading circuit so that the powerful bucket loading is ensured for energy savings.

The equipment has an exclusive z-bar loader linkage, which ensures powerful breakout force. In addition, it has also a 50 degree tilt back angle with powerful breakout force and tractive effort simplifies loading and carrying without spillage. Automatic transmission automatically selects optimum speed from second to fourth gear and vice versa to facilitate scooping and carrying. 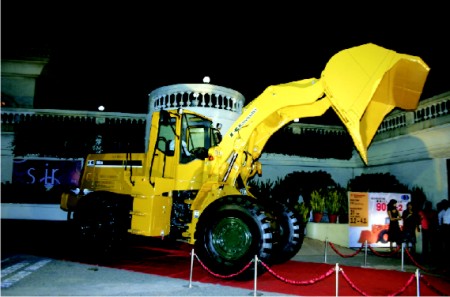 The 90ZIV-2 also claims to be competitive owing to its simplified maintenance and inspection mechanism with the critical points such as radiator water level, air cleaner and greasings can be checked easily. To facilitate cleaning of the radiator, the radiator grille is fully opened at the top, particularly, useful, as the company claims is useful on jobsites where clogging occurs and immediate cleaning is required. All greasing points are easily accessible from the ground. In addition, the engine oil drain plugs are located at lower side of the chassis so that they can be put on and off instantly.

As a part of the safety feature, the wet multi-disc brakes with an air-over hydraulic system assures highly responsive dependable braking to all four wheels with light touch operations. They are sealed to be free from dirt and other foreign objects and a wear paper lining is used for the discs to prolong the service life. As safety features, monitors and air master stroke indicators are incorporated in each front and rear brake circuit. A buzzer sounds whenever an abnormal condition occurs.

That apart, operator can easily engage the parking (emergency) brake when the buzzer and lamp warn that the air or brake oil circuit fails to retain normal condition.

The wheel loader can be used with attachments consisting of log clamp, side fork, snow remover and side dump bucket for various material handling applications.

Product Out of Experience

The Kawasaki wheel loaders claim to have their competitive edge on productivity parameters based on the sustained improvements carried on the product line over a period of 47 years to suit the user industry applications by Kawasaki. Modifications and innovations have been undertaken in the product lines for improved, versatile, environment and userfriendly applications.

Kawasaki claims to have pioneered z-bar linkage that has become the industry standard. This has been followed by series of major improvements like introduction of deluxe cab in 1982 and computer controlled auto shift transmissions during 1988.

Kawasaki manufactures all the major components of its wheel loaders ranging from chassis & steel plate works, transmission & axle, operator's cabin, hydraulic components and cylinders, bucket and attachments at its plant in Japan barring the prime mover-engine.