Demolishing without Disturbing A Success Story On Chennai Metrorail Limited

"The Volvo line of excavators delivers maximum reach and stability with no vibration and very little noise. Now, that's a killer combination for demolitions."


It is never easy to introduce modernity in places rich in history. In a city such as Chennai which has a great architectural heritage and a history of 350 years and so full of 'old-world' charm, the problem gets further compounded. So, when the Metro Rail Project in the city - the largest public project in Tamil Nadu - got underway, the authorities of Chennai Metro Rail Limited (CMRL) knew they had quite a challenge ahead. And they knew it had to do with demolitions - they had to get that right first before anything else.

"You see, Chennai is home to hundreds of heritage structures, quite a few of them in the congested heart of the city which is along the alignment of the Metro," says Mohan Ramanathan, Managing Director, Advanced Construction Technologies Ltd (ACT). "And you don't mess around with Chennai's architectural heritage - not the slightest bit." ACT and VolvoCE are in the forefront of demolitions for the Chennai Metro Project. Together, they have been clearing up the ground for the laying of tracks in Phase 1 of the Project. So far, they have got their act absolutely right at station locations viz Mannady, Central Station, Thirumangalam and Washermanpet. "We are talking about text-book demolitions, really," says Mohan Ramanathan. "It's been swift, silent, smooth… with no untoward incidents and without disturbing day-to-day activity."

Tearing them down with ease 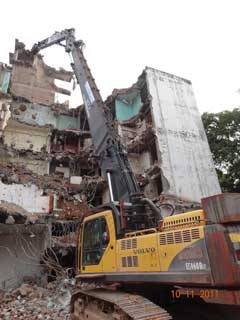 A Volvo excavator pulling down a structure along the alignment
Starting with the razing of the Police Quarters at Mannady station in the busiest Broadway Street in the heart of Chennai. to the pulling down of the multi-storied Hotel Picnic sandwiched between two famous heritage structures near Central Station, the demolitions have proceeded with minimum fuss and stress. "The tearing down of Hotel Picnic was a particularly tricky one," says Mohan Ramanathan. "We had to ensure no damage to landmark structures on either side - Ripon Building & Victoria Public Hall. The clearance area available was only 5m on both sides. But our Volvos pulled it off with ease!"

For the demolition of the 30m-high Hotel Picnic building, and other stations, four Volvo machines were deployed - one each EC210, EC240, EC360 & EC460BLC excavators. The EC460BLC excavator was fitted with a 26m triple demolition boom and hydraulic crusher to tear down the reinforced concrete structure. No damage was caused to the heritage structures, notwithstanding the fact that they were over 100 years old and made of masonry in lime mortar. "The Volvo line of excavators delivers maximum reach and stability with no vibration and very little noise. Now, that's a killer combination for demolitions," says Mohan Ramanathan. According to him, Volvos are real workhorses with a robust under-carriage system and demolition-grade hydraulics that ensure power and control are never compromised. The operators really enjoy working in the cool, comfortable Volvo cabins, he adds.

This is the first time in Chennai that such a high-reach demolition machine has been used. And it has won instant approval from CMRL Project Managers. They find Volvo demolition equipment absolutely safe and recommend them for all future high-rise demolitions in the project. "Well, Chennai has always been a 'city of firsts'," says Mohan Ramanathan. "We are surely glad to be in the list." 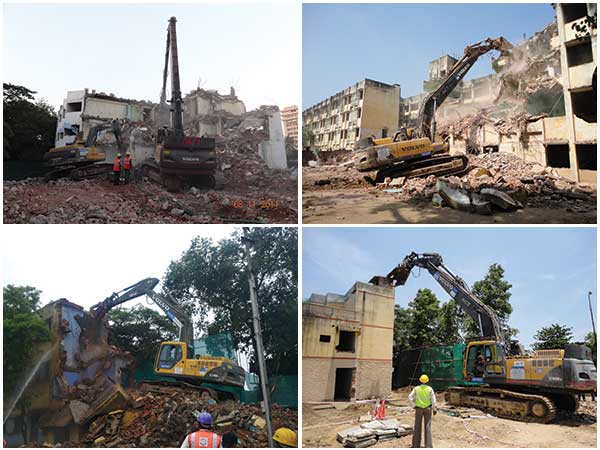 The demolition industry in India is currently pegged at about Rs.1,000 crore. With urban infrastructure set to boom across the country, the growth potential for the industry is huge. "But it needs to get a lot more organized first," says Mohan Ramanathan. "Demolitions are all about bringing it down quickly, efficiently… and as quietly as possible. And you can't do that unless you have the finest people and equipment around - like Volvo."