In a new move to develop coal - methane gas as part of India's energy programme, an Atlas Copco RD20 drill rig coupled with an Atlas Copco XRVS 1250 CD 6 auxiliary compressor and a Hurricane booster is being used to drill holes to depths of 4,167 ft (1,270 m) at coal - methane beds in West Bengal.

Great Eastern Energy Corporation Ltd (GEECL), working on a concession black in West Bengal, is the first private sector company in India to work on the potential of CBM as a fuel to help meet India's fast growing energy needs. India is currently consuming 140,000 MW of electricity per year, approximately 55 percent of which is thermal based and derived from coal. If the country is to meet its projected GDP growth rates for the next five years, an additional 100,000 MW of power capacity would be required, the additional capacity being predominantly coal based. 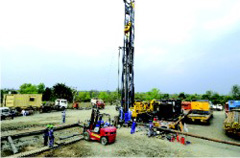 GEECL, which is listed on the London Stock Exchange's Alternative Investment Market, is through its harnessing of CBM also helping to maintain the ecological balance in West Bengal's coal bearing areas, where methane gas is escaping into the atmosphere and damaging the ozone layer. Prashant Modi, president and COO of GEECL believes that the time has now come for CBM to emerge as an important fuel resource. "The thought was, if India has the fourth largest reserves of coal in the world, certainly there is a CBM opportunity here," he says.

"It was hard to find drills in the beginning because it was not cost effective for a contractor to come in and drill the few wells," Mr Modi says. Over the next few years, 20 wells were completed by contract drilling companies. But because of the volume of drilling GEECL was forecasting - 300 wells in the block - the company decided to purchase its own rig.

When they were looking at drills, the best choice was the RD20 because of its depth capacity and Atlas Copco's commitment to the Indian market, and the fact that the RD20 was designed for the CBM industry.

With the purchase of a new Atlas Copco RD20 drilling rig and plans to add a second rig in the very near future, the company expects to drill 100 wells in the next 2½ years and 50 to 60 wells a year thereafter.

The RD20 has an onboard compressor delivering 350 psi of pressure at 1250 cfm.

To speed up the drilling of the large number of exploratory wells, an XRVS 1250 auxiliary compressor was added to the drilling operation, the air from the two compressors being combined and fed through the Hurricane booster and vented directly into the discharge line. The wheeled XRVS is fitted with a CAT C-18 ACERT III engine and delivers 1273 cfm at 365 psi.

This region of India, known as the Raniganj Coal Belt, offers a large industrial customer base for GEECL. The region is largely rural but because of the coal reserves, it has a strong industrial base.

"India is currently importing 70% of its hydro carbon fuels and increased usage of CNG will help reduce our dependence on oil imports," he says.

The concession block secured by GEECL has been very successful. The formation holds 10 seams of coal, each producing gas. The drilling depths average 3,300 ft (1,000 m) with the deepest well to date at 4,167 ft (1,270 m), the RD20 drilling and casing the deepest holes in only five days.