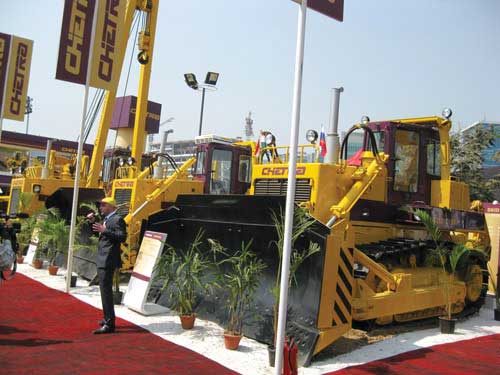 CHETRA, one of the trading units of Machinery and Industrial Group N.V. (M&IG)-the largest Russian international manufacturer of machineries and equipment has brought here in India the most popular Russian industrial machines which are used in oil & gas, coal, mining industries, and in road building sectors. CHETRA’s share in the Indian pipe layer market has already reached to 30% and as estimated by the market players, taking into account the demand of mining and construction industries, it may go upto 40-50% soon.

Today, CHETRA in India offers dozers with the power range 90-590 hp, pipe layers with the lifting capacity of 25-104 t for the pipelines with the tube dia. 200-1420 mm; wheel loaders with the bucket capacity of 3. 5 to 6. 7 c.m. and operating power range 140-600 hp; excavators with 23 ton operating capacity and various types of special equipments for Pipeline cleaning, priming, heating & Insulation works,” said CMI CEO Benjamin Callow during CHETRA stand inauguration at the show. He said further that CHETRA machines are robust in design and construction; the metallurgy adopted for manufacture of critical parts suits well to the Indian condition and performance as a whole extremely satisfactory.

Dr. Mikahil Bolotin, president the Holding company M&IG has visited specially to India during this expo, giving value to the company’s promises for India.

The inauguration of the Russian CHETRA stand, attracted a lot of guests and visitors – The Russian Consular general in Mumbai Alexey Novikov, Trade representative Mikhail Rapota, M&IG vice-presidents Vladimir Lepin and Vadim Kalabashkin, vice-president of the Association of Equipment Manufacturers Megan Tanel as well as media, partner and dealer companies.

During his welcome speech, the trade representative Mikhail Rapota mentioned the importance of the plans of M&IG N.V., the 3-d largest producer of heavy industrial machines to create a production unit here in India that aimed at fulfilling the growing demand and implementation of the high-quality after-sales services. The importance of those plans has grown enormously after the official visit of the Russian President Dmitry Medvedev in India when a new technological emphasis of the international partnership has been made. Today, CHETRA is fairly representing Russia in different global markets, showing the best scientific and technical develop- ments of the Russian specialists.

According to Mr. Vladimir Lepin, Vice-president, global markets, M&IG, the organization of the production unit will strengthen Russian producer’s position not only in India but also in the whole South East Asia region. Australia, Malaysia, Indonesia, Thailand and South Korea have already shown their interest, in Russian CHETRA machines. By the end of 2015 the number of yearly produced machines will go upto 200, said Mr. Lepin. In addition, the Russian specialists will carry out educational and qualification-raising programs for the Indian engineers participating in CHETRA production and services.