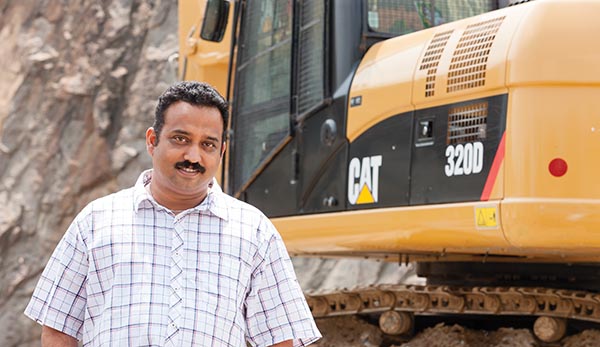 Success in quarrying relies heavily on the right kind of excavator, which is robust and can withstand extremely tough applications. Nobody understands this better than Manesh Thomas, Owner of Modern Rock Mining Industries.

"I started the quarry business in 1992 with Modern Rock Mining Industries. Prior to mechanization of the quarry operations, I had close to a hundred staff running the quarry. I purchased my first Cat® machine, the Cat 320C, in the year 2007," says Thomas.

Talking about his introduction to Cat excavators, Thomas says, "I first heard about the Cat brand through the GMMCO Sales Executive who had approached me when I was on the lookout for buying an excavator. I was influenced by the word-of-mouth from people in the quarry industry regarding the performance and durability of Cat excavators in quarry applications."

His purchase decision was driven more on the performance of the machine rather than brand value of the product. According to Thomas, important aspects of performance include machine productivity, machine uptime and superior engine performance.

"Right from the time I bought the first Cat excavator, I have seen a significant increase in the productivity at the quarry site, which in turn improved my turnover. Subsequently, I bought Cat excavators for all applications that were tough and required high productivity and performance. It has worked splendidly for me," sums up Thomas.

The 320D is a 20-21.5 tonne excavator that is well suited for quarry, construction applications such as utility works, urban construction, demolition, water and sewage works and hire and rental markets. It stands as one of the most versatile machines in the market.

"The design of the bucket has improved the ease of operation in the various quarry applications and thereby maximized productivity. I use the Cat excavator along with a hammer exclusively for the rock breaker application since I feel that the build of the Cat machine is durable and is able to perform well in very tough applications," says Thomas.

"Our operator feels confident in using the 320D especially in applications like overburden removals, which require stability and durability. In the truck loading application where the rocks needed to be loaded onto a truck to be sent to the crusher, the 320D is highly productive and is able to meet the harshness of the application as well as the daily production demands," appreciates Thomas.

The operator station is spacious, quiet and comfortable. This helps in reducing operator fatigue, for day-long productivity. "Operator comfort is the best and it has improved productivity significantly," says Thomas.

The efficient Cat dealer system provides prompt service, thereby minimizing downtime. "GMMCO conducts SOS test every 500 hours and they inspect all Cat machines on a monthly basis. This has helped in achieving customer satisfaction and in the overall development of a good business relationship. Parts availability is good and the dealer branch is located close to our site," says Thomas. 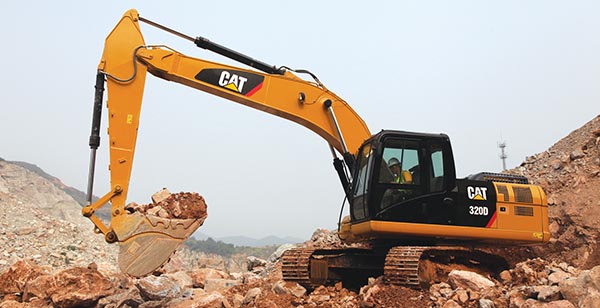