Caterpillar large Excavators are most productive machines- A study

With a burgeoning economy driving high construction rates, the Asian excavator sales market is buoyant but highly competitive.While the Cat brand is well regarded in the fast developing Asia region, a recent production study pitting Cat® excavators against another leading brand highlighted some significant advantages that are applicable across the world.

The market for heavy excavators has been extremely healthy in recent years and with opportunity abounding, Caterpillar recently undertook a comprehensive comparative excavator production study testing against another high selling brand to equip dealership staff with the facts when it comes to performance.

"Fuel economy is probably the leading decision criterion in excavator selection but there was also some confusion in the market and lack of understanding on excavator productivity measurements," Tim said. 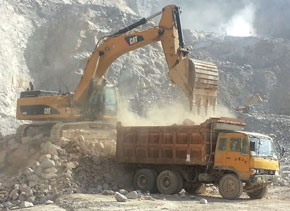 In the first study a Cat 349DLME was pitted against the similarly specified and weight competitive machine. "The Cat has 10% more power and increased hydraulic flow from the same displacement engine," Tim explained.

Both two machines were fitted with approximately 2.6m3 buckets. The extra power and hydraulic flow of the Cat 349D LME also allowed a larger 3.2m3 bucket to be attached to allow a further test of the machine's fuel efficiency and productivity.

Another phase of the test pitted a Cat 340D LME fitted with a 2.69m3 bucket against the more powerful competitive machine.

"It is a smaller machine fitted with a larger bucket delivering almost the same productivity (-2 percent) as the competitive machine but with a 16 percent improvement in fuel efficiency in HHP mode."

"For customers who are more focused on fuel consumption a 340D LME fitted with a 2.69m3 bucket delivers almost the same productivity as the larger competitive machine but with up to 14% less fuel burn when operated in Eco mode." Tim explained.

Choosing the right machine for the task combined with the correct bucket was critical in excavator sales in any application, Tim concluded.

The study also pitted a popular Cat 336D2 against a competitor's machine of 4 tonnes heavier and same bucket size.

The 336D2 features advanced engine controls and hydraulic flow control, which is designed to deliver up to an 8 percent improvement in fuel consumption compared to the 336D, under similar working conditions.

"The Asian excavator market has welcomed the new model Cat 336D2 which now consumes up to 8 percent less fuel than its predecessor but maintains the same power and performance," Tim said. "We are also pleased to be able to offer the 336D2 at a lower price than the competitive machine."

Tim said only Cat publicized hydraulic power figures in the excavator market and the productivity study also checked all the tested machines' net engine power against the actual hydraulic power produced. "For an excavator,hydraulic power is the heart of the machine and is actually doing the work," Tim explained.

"Cat excavators are very efficient at converting mechanical power into hydraulic power and the study showed that the 349DLME converted engine power to hydraulic power at a rate of 86.1%. That compared to the competitive machine in the same class operating at just 79%.

"Cat machines are noted for their productivity in Asia," Tim said. "In harder digging or difficult tasks, Cat is a preferred choice, but for customers in lighter duty tasks who are focused on fuel economy we can now prove to them that selecting the right Cat machine will deliver the results they are after," Tim said

"This study certainly gives our sales teams solid data to deal with and assist customers make a wise choice in their excavator selection.

The productivity study also highlighted that significant productivity gains would also be available to construction, mining and quarrying operations with the implementation of better haul truck and excavator fleet matching and load cycling, Tim said.

"Productivity improvements of this style are quite difficult sell to many companies but there are significant gains to be had by implementing simple haul fleet management processes," Tim said.

"Unfortunately some customers are not really concerned with productivity because they can't create haul fleet efficiency and so focus on fuel efficiency only."

Cat excavators are able to operate in a choice of power management modes:

High Horsepower (HHP) – Capability to operate at maximum rpm and reach 100 percent hydraulic flow depending on the application.

The production study was undertaken at an operating hard rock quarry in September 2013. Excavators were tested loading 20 m3 haul trucks in a 90 degree pattern on 3.1m high benches. Caterpillar cycle timer was used to capture the excavator cycle time and an on-site weigh scale used to measure truck weights. Flow meters were installed on each excavator to measure actual fuel consumption. The hard rock quarry material density is approximately 1.65 ton/m3.